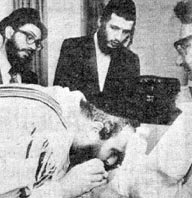 “Orthodox leaders are so infuriated by the city’s educational efforts that some threatened to protest at the mayor’s inauguration wearing yellow Stars of David. In other words, some Jewish New Yorkers were ready to display a symbol of Nazi persecution at City Hall because the health department issued advice to parents about a procedure than can kill babies.”
Full Story, but must be Times Select subscriber to read this article.
Failed Messiah notes that a beneficiary of the metzizah b’peh may be the “special ed” industry and its professionals, thanks to the increased risk of brain damage from the herpes virus.
While some traditions may prove untenable in Modern Times, some things are definitely worth fighting for, so let us join the Chassidim against the Sonei Yisroel (Haters of Israel), who seek to bring another Holocaust upon the Jewish people by outlawing metziza b’peh.
[Update] I took down the most offensive (if incontrovertible) name-calling term within this post, but if anyone thinks we are going to ever return to the days when all aspects of circumcision are glossed over between the honor of being the Sandek until the part about the “festive meal,” you can forget about it.
Those days are over.
It’s naked lunch time now. Babies are dying. Babies are getting very sick. And permanently brain damaged.
The Talmud is very, very wrong.
It is impossible that the Torah, which never mentions metzizah b’peh, really demands it be done.
What else needn’t be done? Brit Priah, perhaps?

Get Paid to Drash Righteous