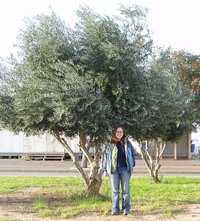 At sundown as the moon of Shevat reaches its fullness, the holiday of Tu Bishvat (literally the 15th of Hebrew month of Shevat) will begin. Though its origin in the Bible denotes the fiscal year for the trees (fruit that appeared before that date was taxed for the previous year; fruit that appeared after, for the following year), today most people celebrate the holiday with a ceremony based on the Passover seder. The Kabbalists of Tzfat, who believed that the Tree of Life, God’s own flow of abundance, was reborn on this holiday, created this seder to corresponde to the four worlds model.
–Based on the teachings of Rabbi Arthur Waskow
For some background on Tu Bishvat as a holiday:

If you’re looking to do your own Tu Bishvat seder or just see what one looks like, here are some places to get yourself started. Note: these sedarim also have information on how to make simple changes in your life, such as COEJL’s 15 simple conservation actions.

Last note: Thanks to Danya for pointing out that Tu Bishvat falls on Charles Darwin’s birthday. How cool would it have been to have an interfaith event celebrating both Darwin’s birthday as well as Tu Bishvat?
Hag sameach to everyone!

Negotiating Civil Liberties: Inclusion for Some

Join Jewschool in NYC on Sunday, 11 am, to support a ceasefire!