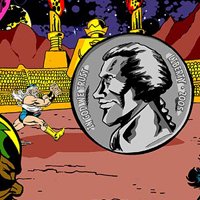 They don’t leap tall buildings in a single bound or scale skyscrapers. They don’t transform into not-so-jolly green giants or zoom around in tricked-out sportsmobiles. Instead, Minoriteam — a motley band of minority superheroes — uses stereotypes to fight their archenemy: racism.
Created by Adam de la Peña, Todd James and Peter Girardi — all alumni of the ribald Comedy Central puppet series “Crank Yankers” — “Minoriteam” is a provocative animated show that sends up bigotry. It makes its debut tomorrow night on Cartoon Network’s late-night “Adult Swim” block of animated shows for viewers who have outgrown the Disney Channel.
[…] Neil Horvitz may be a wimpy mail clerk in his early 20’s, but his alter ego, Jewcano, is a muscle-bound 62-year-old who sports an XXXL yarmulke and has all the power of the Jewish faith and a raging volcano. Watch him shoot molten lava from his wrists (move over, Spider-Man).