When I was at the Rejewvenation conference in Toronto this past November, York University professor Carol Zemel gave a rather interesting presentation on the nature of Jewish art. What makes art Jewish? Is it that it addresses Jewish themes or invokes the shtetl or biblical Israel? Nay, cultural homage does nothing to distinguish art as distinctly Jewish. Rather, Zemel suggested, it is radical iconoclasm which distinguishes Jewish art as unique in form. Jewish art carries on the Abrahamic tradition of smashing idols and challenging our preconceptions.
Conceptual artist Melissa Shiff‘s work often integrates both of these elements — the cultural and the iconoclastic — and is thus, perhaps, doubly Jewish. Projects such as “The Avant-Garde Jewish Wedding” (opening tomorrow at the Spanish Synagogue in Prague), “The Medium is the Matzo,” and “Gender Cuts: Jews Under The Knife,” explore our traditions while confronting the manner in which we relate to them. They also challenge the way we typically interact with art, by providing immersive experiences that incorporate the observer into the artwork, such as with her “Passover Projections.”
Shiff’s latest project, JAP, comfortably nestles into her artistic niche, by reconstituting the stereotype of the Jewish American Princess as one who shops, not for the sake of mere consumption, but for the advent of social justice.
“JAP appropriates a common Jewish epithet and gives it a positive spin by turning shopaholics into art funders and mitzvah doers,” Shiff told Jewschool. “JAP encourages shopping and consumerism but not as an end in itself. JAP will use a portion of its profits to feed hungry people and devote the rest of its profits to fund culturally reinvigorating and socially progressive art projects.”
An outgrowth of her 2005 “The Medium is the Matzo” installation at NYU’s Bronfman Center, the online shop sells matzah-stuffed “Crush Oppression” throw pillows and Matzo Ball Activist kits which emphasize the relationship between Passover and social action.
“As an artist/activist, I want to create a link between the Seder and mitzvahs,” says Shiff. “My Matzo Ball Activist kits and Crush Oppression Matzo Pillows achieve this end. That’s why my slogan on JAP is ‘Where shopping is a Mitzvah.'” 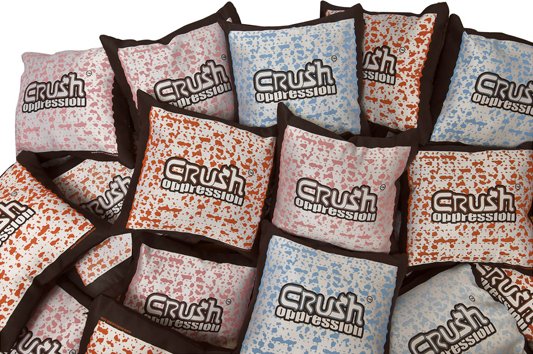 “The Passover ritual has such incredible potential for social action, after all, there is a mandate in the Haggadah to ‘Let all who are hungry come in and eat.’ My hope is that people will actually enact this and change their rituals from stories that are merely told to stories that are acted upon.”
Thus, says Shiff, “I’m taking back the term JAP in order to subvert it into something with positive meaning, content and politics.”
Shiff appears to be “claiming and disclaiming [JAP] at the same time,” suggests Dr. Jeffrey Shandler, professor of Jewish Studies at Rutgers University. “By reinscribing the acronym for Jewish American Princess as Jewish Art/Products/Politics, shopping is elevated to the status of mitzvah and political activism, and all are claimed as acts of Jewish pride. Thus, the subversion of the JAP embraces another more familiar transformative trope–that of equating Jewish piety with acts of social justice.”
Shiff’s project thus plays on many levels. With a single online purchase, one can partake in honoring and transforming our traditions, shattering stereotypes through positive reinterpretation, supporting the arts, and encouraging acts of social justice, all at once. Has there ever been a greater reason to shop?
Just one more reason why, as Douglas Rushkoff pronounced on Jewschool a year ago, Melissa Shiff offers the “the best of Jewish conceptual art.”

Why Is The Reform Movement Scared of Circumcision?

Kein, Annu Yicholim (Yes, We Can)