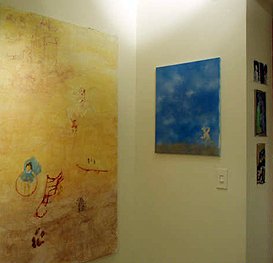 It’s difficult to look at art. Most of us aren’t trained for it. I spent three years in college working in an art museum and still get kind of nervous when I go into a big room with no furniture and white walls glaring at me. And apparently I’m not the only victim of this phenomenon: attendance at most art museums is dropping drastically, especially among young people, who would rather go see movies or concerts.
Now featured at NYU’s Bronfman Center (7 E. 10th St in New York), the exhibit “Beyond Graffiti” is as wisely titled as it is engaging. Featuring Jewish artists from Tel Aviv, Jerusalem, and New York City, the show revolves around the notion that art can be found anywhere. “Beyond Graffiti” celebrates simple materials and unadorned messages. However, the word “graffiti” itself brings to mind things that are eternally cool: street life, rebellion, the avant-garde.
The opening this past Thursday was not quite like any other opening I’d ever been to. Sure, there was hummus instead of pate, but the crowd was overwhelmingly male (I overheard one guy complaining that “I’m not sure I’ve ever been in a place so devoid of hot women” — thanks for the compliment, dude) and overwhelmingly young. In fact, some kids who looked no older than fifteen tried to get me to snag some wine for them.
The only actual graffiti in the show is found in a Yoram Amir’s Jeru$alem photograph series. Instead of someone tagging a building to imply ownership, this graffiti has political resonance: the slogans urge the viewer to acknowledge that the enemies they should really be fighting are large corporations and crooked politicians. Shlomo Rydzinski’s work is comic book inspired and utilizes text (here, a couplet from Mima’amakim founder Jake Marmer). In terms of his work fitting into the theme of the show, he noted, “I do feel somewhat of a kinship towards grafitti’s graphic aesthetic, which heavily incorporates text.” 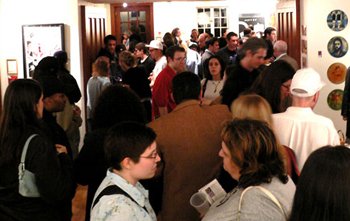 Many of the other works kept an eye on graffiti’s history as a politically charged medium: Michael Baruch’s ‘zine Dimona was named for the city where Israel keeps most of its nuclear weapons, and Aya Dan used spray paint on cardboard to mimic and pervert well-known corporate logos. Possibly the most striking piece of the evening was by Tanzeen Ahmed, whose Basquiat-inspired painting represented the “vulnerable” lives of women and girls in Pakistan. With a neutral tone as his backdrop, Ahmed used brightly colored, sharply drawn lines combined with crude renderings of exposed genitals to make something as alluring as it was shocking.
Further pushing the notion of street art into the one of “found art,” several artists preferred keeping their messages more nuanced. Denise Carbonell had a wall full of wires shaped into hands, a representation of the way that machines become a means of communication. Lest the show appear to eschew Jewish tradition completely, Carbonell also displayed a series of hamsas. I’ll leave the last word for fellow NYCer Meres, whose work is cartoons drawn on Dunkin’ Donuts napkins and hints at popular corporate phraseology. “This art is made from recycled images,” he writes. “Please litter.”
Photos care of Lois Stavsky. Full disclosure: This event was co-sponsored by Corner Prophets, a project of Jewschool’s parent organization Matzat, and features art by Jewschool’s editor, Daniel ‘Mobius’ Sieradski. He is interviewed about the exhibit here.