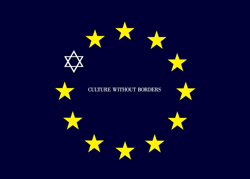 I am a Jew born in Europe and I feel strongly about being both European and Jewish. As I rarely get to hear matters Jewish and European discussed in the present tense I had high hopes for a congress in my hometown of Stockholm, Sweden on “The New Cultural Landscape in Europe and the Jewish Experience.” The speakers were academics and artists, most of them Jewish. Naïvely perhaps, I was anticipating some fruitful perspectives on Jews and newer minorities in Europe, maybe even dialogue with representatives of such minorities. I was disappointed. Much of the talks and panel discussions devolved into talk about new immigrants in Europe (there were virtually none present at the congress) as problematic others, less civilized than “us” — European Jews. The implication seemed to be that “we” belong in Europe and thus deserve citizenship and inclusion while “they” do not.
Most of the speakers seemed to imply that the “new immigrants” must be integrated according to the implicitly successful Jewish example. One of the more vocal proponents of this approach was Alain Finkielkraut, professor of philosophy at École Polytechnique in Paris, who unleashed a shitstorm with his comments in Haaretz last year in the wake of the Paris riots. Finkielkraut felt that more immigrants should follow the example of his parents who “came from Poland in 1946 and spoke only French, never Polish at home.” David Coleman, a demographer from Oxford showed graphs projecting dramatic increases in “foreign” populations in Europe over the next thirty years meanwhile saying that children of immigrants would and should remain foreigners until they “earned citizenship” through assimilation. The more measured voices came from the oldest participants. Shmuel Eisenstadt, professor of sociology at the Hebrew University, spoke of the fact that the mainstream will always shift with influxes of populations and pointed out that this need not be bad. Yosef Gorny, professor of modern Jewish history at Tel Aviv University, reminded the audience of now discarded models of diasporic existence and cohesion such as Bundism, and the writings of Simon Dubnow.
The lasting impression of the congress was a sense that most are reverting to nationalist models of thinking and barricading themselves in their own corner in the face of rising ethnic and political tensions in Europe. Anti-Muslim sentiment and xenophobia is on the rise, and anti-Jewish sentiment is gaining ground both among Muslims living in Europe as well as among many native Europeans. The response of many European Jews to the revived xenophobia in Europe seems to be a scramble to put distance between ourselves and other minorities in a desperate attempt to affirm our belonging in Europe. Meanwhile it appears we are not ready to let go of monopolization of the outsider-victim status in Europe which at the congress led to a rather schizophrenic jargon where “we” alternately meant “us civilized, western Europeans who happen to also be Jewish” and “us Jews who are persecuted by Europeans.” Yet nobody is willing to take a closer look at the fact that European Jews with a long and varied experience as professional outsiders offer a discouraging example of European acceptance.