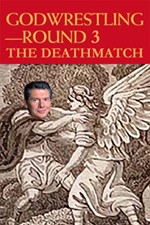 Yisrael, thou hast a new name, and it is Vince McMahon. The World Wrestling Entertainment chairman and pro-faux-wrestler has announced a tag-team match pitting he and his son Shane against rival Shawn Michaels — a born-again Christian — and God.
WWE.com reports,

One night after WrestleMania 22, HBK [Shawn Michaels is also known as the Heartbreak Kid or HBK] came out on RAW to address the crowd. He said that he was looking forward to getting over his spat with the McMahons, and was looking forward to perhaps challenging for the WWE Championship. Mr. McMahon, however, had a different idea.
The WWE Chairman and son Shane came out to rebut, telling Michaels that it was divine intervention that helped him to victory at WrestleMania. Mr. McMahon then told HBK that no one ever wins a war against the McMahons, and that he would need God’s help again at Backlash, because God would be his partner against them in a tag team match. (Watch the video)
After visiting a church looking for God the next week, (watch the video), Mr. McMahon found him on the April 17 RAW. Early in the night, Mr. McMahon announced a new religion, McMahonism, and said that he was the deity. HBK then came out of nowhere, nailing the WWE Chairman with Sweet Chin Music. (Watch the video)

Given McMahon’s long track record for pushing the envelope when it comes to tasteless wrestling angles and ending up with egg all over his face, there’s always the possibility that there will be a, er, backlash to the Backlash match if and when Christian groups hear that God has been reduced to being a player in the WWE’s little morality play.
In fact, the WWE might be counting on it, says Dave Meltzer, editor of the Wrestling Observer newsletter, which covers the fake sport from a behind-the-scenes insider’s point of view. “I really believe that they’re desperately seeking attention right now. They think what’s lacking is no one is talking about them — there’s no water-cooler talk.
“They think this will be like the Mel Gibson movie (The Passion of the Christ) and spur them back into being in the mainstream.”

The match will be aired on Pay Per View April 30.

AJCommittee: Judgement Day Upon Us