“The primitiveness of rap and the consumerism of the mall threaten to trivialize the literary culture that is the pride of Judaism.” — Rabbi Ismar Schorsch 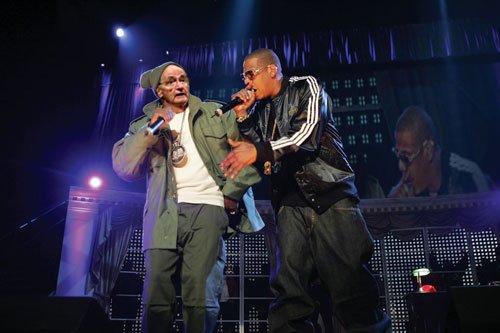 NEW YORK, JUNE 5, 2006 — Leading rap artists and producers were stunned this week by remarks made by Rabbi Ismar Schorsch, outgoing Chancellor of the Jewish Theological Seminary of America, during his farewell commencement address.
“Nigga said what?” asked a stunned Marion “Suge” Knight, rap impresario and founder of Death Row Records. “Motherfuckin’ Chancellor don’t quit, do he?”
“JTS keeps throwin’ shit our way,” said rapper DMX. “When we gonna say enough is enough, you gotta put up or shut up?”
The night of Rabbi Schorsch’s remarks, there were reports of gunfire outside New York’s “Hot 97” radio station involving bodyguards for rapper T.I. and members of the Rabbinical Assembly’s Committee on Jewish Law and Standards.

“Streets is tense, that’s all I’m sayin'” said Nas, author of the 2002 rap anthem “Momma It Ain’t Time,” widely regarded as an attack on the Conservative Movement’s practice of ordaining women rabbis. “We been puttin’ up with Issy’s tantrums for years, but this was way over the line.”
Experts worry Rabbi Schorsch’s remarks could ignite a rap war rivaling the deadly East Coast-West Coast battles of the 1990s.
“Rabbi Schorsch basically took a flamethrower to a gas station,” said Toure, the popular television personality and Contributing Editor at Rolling Stone. “Right now, everywhere you look, peeps is like —What’s the next move?'”
The debate, outrage and introspection sparked by Rabbi Schorsch’s comments pervaded the hip hop industry. “I just can’t believe he’d go off on us again,” said an incredulous James “Clock Box” Maler, a breakdancing subway busker frequently found on the New York Subway’s A Train. “Issy’s been a playa hata for years, but I ignored him the way I always ignored the reactionary elements of Jewish tradition. Now it’s personal.”
A visibly shaken Jay-Z, President and CEO of Def Jam Records, said Rabbi Schorsch’s remarks were out of bounds. “JTS has gotta know this won’t be taken lightly,” he said. “Sure, I’ve done battles with Dizzy Dave [Kraemer] and my nigga Gillz [Dr. Neil Gillman], but we knew the rhymes was friendly. Schorsch, he’s taken that shit to a whole new level. I mean, the hood is on fire right now.”
Some commentators noted the irony in Rabbi Schorsch attacking the culture and values of hip hop. “What’s frustrating is that in many ways, Rabbi Schorsch shares a lot in common with the hip hop community,” said Michael Eric Dyson, noted cultural critic and author of the forthcoming Terrorizing the Other: Homophobic Discourse in the Lyrics of Dr. Dre, Big Pun and Ismar Schorsch. “To hip hoppers, it’s like getting backstabbed by a brother.”
Rabbi Schorsch’s comments have already inspired a response. Two days after the commencement address, legendary rappers Busta Rhymes, Ghostface Killa, Xhibit, Redman, Method Man and Lil’ Jon released a collaborative track on Itunes titled “Solomon Schechter Grundy.” Among the most incendiary lyrics was “To that nigga called Schorsch/ Ya know ya voice is gettin’ hoarse/Think it’s time for a divorce/Drop ya ass in bloody borscht/Nigga.”
“Shit’s getting’ wild, and the question is, where’s it gonna end?” asked KRS-One, a veteran of several rap battles, including an extended lyrical joust with JTS Provost Jack Wertheimer in 1994. “Issy’s gotta know, you step to the plate like that, you in the game. There ain’t no backin’ down.”
Rabbi Schorsh’s battle with the rap industry goes back more than a decade. In 1991, he remarked that the Jackson 5 sample on Naughty By Nature’s “O.P.P.” revealed an intellectual and creative lethargy that had pervaded hip hop music. “And yes, I know what O.P.P. Means,” Rabbi Schorsch insisted during the annual assembly of the United Synagogue of Conservative Judaism. “Don’t even go there, bitches.”
In 1996, appearing on BET’s “106 and Park,” Rabbi Schorsch publicly challenged Sean “Puff Daddy” Combs to a dance off. Mr. Combs ignored the challenge, an act Rabbi Schorsch interpreted as “an admission of defeat no less momentous than Korah swallowed whole by the earth!” More recently, Rabbi Schorsch claimed that Eminem stole the idea for “8 Mile” from his upcoming monograph, 8 Miles to Halakhic Illumination in the Later Responsa of Yosef Karo.
The current controversy adds fuel to ongoing speculation that Rabbi Scorsch had a part in the still-unsolved murders of Tupac Shakur and The Notorious B.I.G. “He was at a Rabbinical Assembly meeting in Las Vegas on September 7, 1996,” said British filmmaker Nick Broomfield, director of the documentary “Biggie and Tupac.” “That was the night Tupac was shot. And on March 9, 1997, when Biggie was killed, the Rabbi was attending a Camp Ramah reunion in LA. It all adds up, you just need to do the math.”