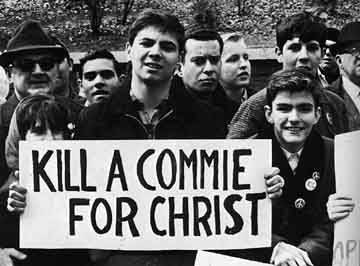 Are you a true believer? Do you just know deep down in your black Wal-Mart socks that every word of the Bible is the absolute literal truth and nothing dare be doubted and anyone who thinks that God is merely an ambisexual omniblissful bloom of moist divine nondenominational honeydew melon should be strung up by their small intestine and beaten with sticks sharpened by Mel Gibson’s teeth?
Do you feel, furthermore, that human cretins like, say, gays and Jews and Wiccans and all those hippie weirdos with their iPods and low-cut jeans and easy laughter are a plague upon this fine and holy land?
Do you think that contemptible books like “The Da Vinci Code” are not only blasphemy, but that you should probably go out into the street right now and behead a few lambs and perhaps mow down some Taoists with a Gatling gun just to deflect its horrible notions of the sacredness of the feminine divine? You do?
Praise Jesus! Your video game has arrived.

Expected to hit stores later this year, Left Behind: Eternal Forces offers Christian soldiers the chance to kill Satan’s odious hordes here on earth: The residents of New York City. The game received a seemingly unintentional “endorsement” from megachurch maven Rick Warren by way of Mark Carver, Warren’s advisor who resigned from Left Behind Games only days ago amid the controversy surrounding the game.
Via Talk To Action:

Imagine: you are a foot soldier in a paramilitary group whose purpose is to remake America as a Christian theocracy, and establish its worldly vision of the dominion of Christ over all aspects of life. You are issued high-tech military weaponry, and instructed to engage the infidel on the streets of New York City. You are on a mission – both a religious mission and a military mission — to convert or kill Catholics, Jews, Muslims, Buddhists, gays, and anyone who advocates the separation of church and state – especially moderate, mainstream Christians. Your mission is “to conduct physical and spiritual warfare”; all who resist must be taken out with extreme prejudice. You have never felt so powerful, so driven by a purpose: you are 13 years old. You are playing a real-time strategy video game whose creators are linked to the empire of mega-church pastor Rick Warren, best selling author of The Purpose Driven Life.

More here, here and here.
Don’t miss Joel Stein’s review in the LA Times, wherein it is revealed that the game’s creator is a Jewish convert to Christianity.

Because I’m Jewish, I told Frichner that he could play the side of the good guys and that I’d be Satan. That’s when Frichner informed me that he grew up as a religious Jew in Queens who went to temple every Saturday.

…And now he makes video games which give people the opportunity to live out their fantasies of killing Jews on the streets of NYC. How nice to know he’s seen the light.