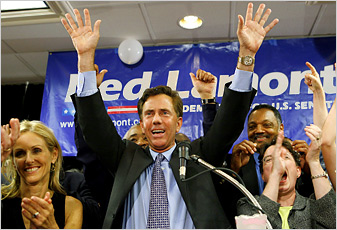 I never thought I’d see the day I’d feel compelled to travel back into CT to vote for a primary, but I did tonight with a handful of other politicos who are celebrating that Lamont defeated Lieberman. (An interesting piece on Jewish views on Lieberman here)
I must admit, while it felt great to vote out Lieberman, it was eery to vote for a Greenwich aristocrat of exhorbitant wealth in order to defeat a long time incumbent whose politics are so grossly out of line that Lieberman falls to the right of many Republicans in office–and I’m not saying this as a Democrat (because I’m not) nor am I only looking at his stance on the war or his support for Bush. Lieberman has long been in cahouts with Republican powers and staunch supporter in passing a number of repressive social policies during not only the Bush eras, but also the Clinton administration’s legacy of Welfare “Reform”, DOMA (Defense of Marriage Act), and the list goes on and on.
Not surprisingly yet poignantly, all it takes is a multi-millionaire to vote out an incumbent–Lamont, who has little to no political background or experience, is rich. Period. With that then, his wealth means he is not tied to the same corporate holdings and strings that many other political candidates are–he can call for universal health care without worrying about whether the insurance companies are backing his campaign. He isn’t touched in the same way by gerrymandering politics and campaign finance. Complex is it not? So apparently we should be at ease with the idea that all we need is to be insanely wealthy to change the nation?! Well, I have to say, not surprisingly I’m sure to some, that it’s questionable to call this change. Historic indeed, but celebratory in its entirety is still questionable in my eye.
crossposted to jspot

Get your head out of your tuches time!!