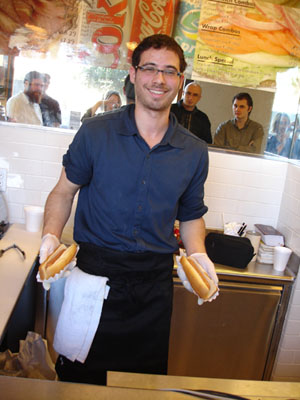 Join every observant Jew in the Bay Area (plus dislocated New Yorkers and casual pastrami gluttons) and hit up the two week old S.F.- New York Deli for kosher sandwiches, hot dogs, soups and Dr. Brown’s. Those of you from out of town are probably thinking, who cares? But the scene at the deli today was full of exuberance and tzitzit as we can now count a whopping THREE kosher restaurants in town. Sh’koich to Yisroel Freeman for taking the leap.
The food was tasty and filling (with the possible exception of the pickles which were not to this full sour aficionado’s tastes.) The corned beef was great and so was the chicken soup. (I’ll get back to you on the pastrami and knish tomorrow.) The sukkah was full of Mission Minyaneers, Chabadniks and families that had schlepped in from Walnut Creek – apparently this is the only restaurant with a sukkah in the area. My friend Emily looked at me and said, in utter confusion, “Where ARE we?!”
In the Embarcadero Center open air food court, next to Justin Herman Plaza. Just look for the sukkah, and Moishe and Peretz with the four species. Map here.

The Epitome of High Fashion