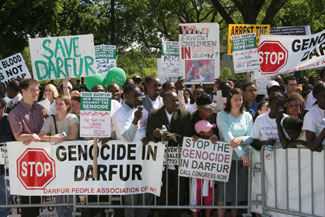 While the world continues to sleep through what is arguably the most brutal systematic genocide since the Holocaust, three 18 year-old yeshiva students and Anglo transplants, Arielle Perlow, Rachelle Kupferman, and Seraphya Berrin, have taken it upon themselves to raise awareness in Israel about the issue, by organizing a “Save Darfur” rally in downtown Jerusalem.
The event, scheduled for tomorrow night (Monday at 8PM) in Zion Square, will feature several local rabbis and educators, a representative from Amnesty International, and Eytan Schwartz, winner of “The Ambassador” (Israel’s version of “The Apprentice”). The organizers expect hundreds of attendees from “many different yeshivot, midrashot, college campuses, youth groups, and shuls.”
Co-organizer Seraphya Berrin, an Australian resident of the West Bank and student a Yeshivat Har Etzion, sees Darfur as an inherently Jewish issue. “Jews have been the direct target of genocide in the past more than once,” says Berrin. “If anyone should feel for these people it should be us.”
However, the issue of Jewish involvement and moreso of a desired Israeli involvement in Darfur has grown exceptionally complicated, particularly following the remarks of Sudanese President Omar Hassan al-Bashir, who in September claimed that Zionists have “motives” to “dismember Sudan.” This sentiment has become standard fare on the radical Left, with online forums such as Indymedia awash with suspicion of Jewish interests in the region.
“This effort by Sudan should be answered proudly,” says Hebrew University professor Elihu Richter, one of the planned speakers for tomorrow’s event. “We are flattered by the compliment that Zionism is committed to life and saving life as the value that trumps all other values.”
“It is not yet a Zionist issue,” says Berrin. “In fact, many Israelis are unaware of the atrocities altogether. It must become a Zionist issue. We are flattered by this accusation, and view it as a spur to action. Just as Israel was involved in support of African nations from its inception, especially with agricultural & technological training, so too, Israel must be at the forefront here.”
“Genocide is genocide is genocide,” Berrin adds. “It doesn’t matter what ethnicity, race, or religion the perpetrators or victims are. In this case, the victims also happen to be Muslim, so it is a bit of a ridiculous accusation. Relying on geopolitical stereotypes is an easy way to avoid confronting the moral challenges in the world around us.”
Asked if he felt that, as a resident of the West Bank, he was being in any way hypocritical by denouncing one form of oppression while purportedly participating in another, Berrin responded, “Don’t let the stereotype of settlers make you think that I don’t care about Palestinians.” He continued, “I do not think that living in Gush Etzion is part of the occupation, nor do I think the Israeli occupation is at all comparable with what is going on in Darfur.”
For more information, visit haedarfur.org.

Isaiah's vision and Our Blindness (Justice and Trayvon Martin)

The Two State Solution is Dead and American Jews Killed It