First they came for the Mashichists, but I wasn’t a Mashicist so I didn’t speak up… 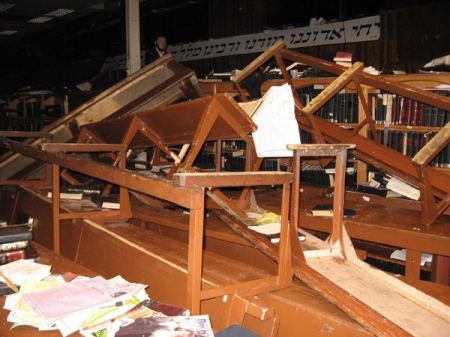 About 20 minutes later, when 770 was empty of all “Meshichistim”, the villains grabbed the paroches of the Aron Kodesh and forcefully pulled off the “Crown” of the paroches with “Yechi”. In the morning the shamash of 770 brought a old “Crown” of the paroches, replacing the stolen one.
Following this Yisroel Shemtov brought police to the ATAH offices, which broke down the door and Y.S. ordered them to arrest the bochurim inside.
In addition to the damage to the Yechi signs and the paroches 770live was broken into and the computer and other equipment was stolen and put into a black car of the Shomrim.