Something on Reason’s blog, Hit & Run, caught my eye the other day — a study by Students for Sensible Drug Policy that shows a direct correlation between the amount of money spent on the US Office of National Drug Control Policy’s advertising budget and the rate of teenage drug use. The more money the ONDCP spent, it turns out, the more kids did drugs.
See for yourself: 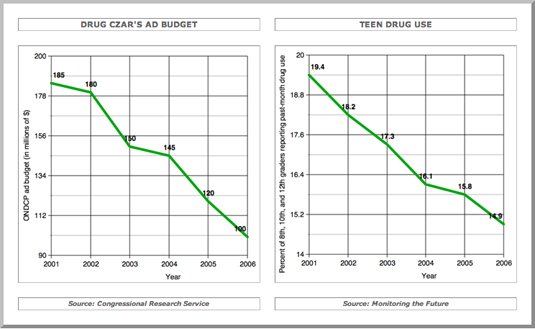 Government studies have shown that anti-drug advertising is so ineffectual that, as the National Institute on Drug Abuse noted, there is “little evidence of direct favorable […] effects on youth.” Rather, “effects were consistently in an unfavorable direction, i.e., higher exposure leading to weaker anti-drug norms.” Even the White House conceded that there has been “little or no direct positive effect on youth behavior and attitudes attributable” to their anti-drug advertising campaigns.
Seems like a colossal waste of taxpayer dollars, no?
Welp, not seeming to mind the 35% of Israeli youth and 33% of Holocaust survivors living beneath the poverty line, the Israeli Anti-Drug Authority has recently launched its own colossal waste of an ad campaign.
Here, a young woman named Shiri is seen high on drugs, paranoid and freaking out. An official looking character informs her, “No one is chasing you, Shiri!”

Ale Yarok, the Israeli Green Leaf Party, a pro-legalization group, responded with a video of their own, depicting who it is that Shiri actually fears.

As I’ve noted previously, Israel would be much better off if it stopped wasting money on harassing and imprisoning non-violent drug offenders (of currently which there are 12,000 in Israeli prisons). This is just one more example of wasted taxpayer resources that could be more effectively spent on measures such as harm reduction which, acknowledging the failures of prohibition, encourages safe and resposible drug use.

Agriprocessing gets raided by ICE

Questions about the Jewish future