I’ve been meaning to share this photo for a while, and today’s NY Times piece reminded me of it:
During the Israeli-Palestinian Comedy Tour‘s performance at the American Colony, the folks from CNN stepped out for a second and the camera man (who was quite clearly European) asked me to keep an eye on his gear.
I noticed something a little, um, funny about this man’s camera. Perhaps you’ll notice it as well. 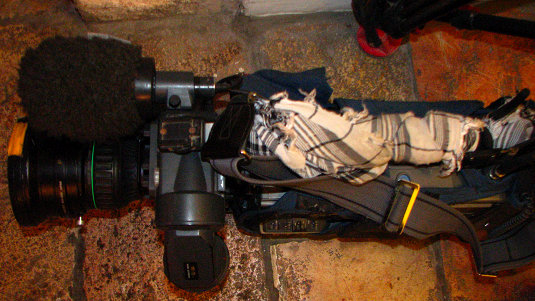 I won’t bother to presume anything at all, but I do wish to ask: Precisely why does this man have a keffiyeh wrapped around his camera? Is it an expression of solidarity? And if so, does that not indicate a rather overt bias? And if it does indicate bias, is he really so strategically inept that he’ll then flaunt it unabashedly?

But what about Loch Ness?