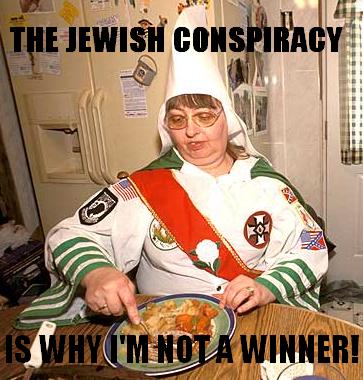 People For The American Way reports:

Powerful Texas state Rep. Warren Chisum (R), an advocate of religious-right causes such as banning adoption by gay couples and amending the state constitution to ban same-sex marriage, has passed along a “memo” from a kindred spirit in the Georgia House claiming that “teaching evolution amounts to indoctrinating students in an ancient Jewish sect’s beliefs,” reports the Dallas Morning-News.

The memo has been tied to the offices of conservative Republican lawmakers who reject evolution. It was written by Marshall Hall, who ran an election campaign for Georgia State Rep. Ben Bridges. Warren Chisum, a powerful lawmaker in the Texas state house, has distributed the memo. On his Web site, www.fixedearth.com, Hall describes Albert Einstein as a kabbalist, and says the ancient Jewish mystical discipline is “anti-bible” and “anti-Christ.”
The Anti-Defamation League on Thursday asked Bridges to repudiate the memo’s contents. Bridges has distanced himself from the memo, which Hall originally distributed in Bridges’ name.

Hillel reaches out to Queers on Campus