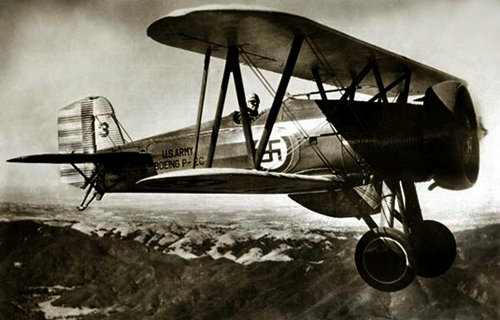 Rex Curry may be batshit crazy, but sometimes Internet kooks uncover some pretty fascinating material. In his quest to prove that the Nazis coopted both the swastika and the “heil Hitler” salute from American culture, Curry, who sells his rambling anti-Socialist conspiracy screeds on eBay, discovered the above image of an American fighter plane bearing a swastika, as well as several other remarkable pieces of lost American history — for example, this photo gallery of school children saluting the American flag in a disquietingly familiar fashion.
Does it make America an evil fascist empire? Nope. But it does raises interesting questions about the affects of nationalism and patriotism, and their common form and function across cultures.