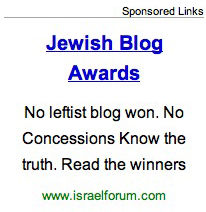 I got a pingback earlier from a post on Tikkun Olam, Richard Silverstein’s blog, in which Richard expresses his dismay at apparently being banned from JBlog Central, the Jewish blog aggregator hosted by Israel Forum, a site for “24-Hour News, Discussion & Debate from a Pro-Israeli Viewpoint.” Richard had linked to my post from February in which I recounted the sordid tale of JBlog Central and the Jewish & Israeli Blog Awards.
Taking Richard’s concern that he had been “blackballed” with a grain of salt, I decided to check if there was some foul conspiracy afoot against Left-wing Jewish bloggers, and, sure enough, discovered that Jew School, Radical Torah and Orthodox Anarchist had also been removed from JBlog Central’s aggregator. (Politics? Maybe. Ridiculing his ad campaign? Probably.)
This mildly confounding and yet hardly surprising news comes at an interesting juncture, whereas Chaim, the blogger behind Life-of-Rubin and founder of the J-Blogosphere Blog, recently announced the relaunch of the Jewish & Israeli Blog Awards (JIBs).
As some may recall, Chaim caused a bit of a ruckus last year over what he deemed to be suspicious behavior on the part of JBlog Central’s webmaster, calling into question, among other things, the legitimacy of JBlog Central’s voting process. Chaim’s concerns ultimately resulted in a pretty widely supported boycott of JBlog Central’s awards, which in turn led to the official title of the JIBs being revoked from JBlog Central and passed onto Chaim by JIBs founder Aussie Dave of Israellycool.
Soon after Chaim’s announcement, a new blog, Ploni Baloney, was launched, featuring a cartoon entitled “Life-of-Rhubarb,” which essentially mocks Chaim and the JIBs controversy. Interestingly, and also unsurprisingly, Ploni Baloney is now being featured prominently on JBlog Central, and the site itself is carrying a banner for Israel Forum’s ad ring network.
I decided to do a little bit of investigation in order to figure out just who exactly is behind Israel Forum and what their agenda is. After all, the site’s owner isn’t a known jblogger, so he can’t be out for his own blogging glory. And more so, his site isn’t monetized (ie., there are no ads on it, so he doesn’t seem to be turning a profit). This made me all the more suspicious about who this fella is and, likewise, wondering wherefore came the “Conservative Revolution” stick that appears to be so firmly planted in his buttocks.
So here’s what I dug up…
IsraelForum.com’s DNS points to GoodMorningSir.com, which also hosts NewAmericanVoter.com, Widecast.com, GellerNet.com and Top10Mag.com. All of these sites are offline, but the domains are nonetheless registered to Israel Forum, in Reseda, CA (go Karate Kid!). That is, with the exception of Top10Mag.com. Top10Mag.com is registered to NewsFactor Network, which lists David Geller of Woodland Hills, CA, as its technical and administrative contact.
NewsFactor.com, also owned by NewsFactor Network, is a wireless technology news site built on the same model as Israel Forum, and which uses the same software, BLOGOWOGO. The only other site, aside from Israel Forum and NewsFactor using BLOGOWOGO is CIO-Today.com, which, incidentally, is also owned by NewsFactor.
BLOGOWOGO, it would thus appear, is a community-oriented blog aggregator package developed and distributed by NewsFactor, a company owned by David Geller, the anonymous creator and webmaster of Israel Forum.
All the aforementioned sites share, more or less, the same registration info, though with variations on the suite number and telephone number associated with each project. (Feel free to look them up yourself.) So I ran a basic lookup on the address, but the closest I could come to anything remotely interesting was a record of a $1,000 donation to George W. Bush’s 2004 presidential campaign from a woman sharing the same address as Geller, but with a different last name.
I don’t consider it beyond the realm of possibility that Geller is working with members of a radical pro-Israel group that’s seeking to usurp and/or manipulate the Jewish blogging community for their own political interests; cuz hell, we know it’s on the agenda. However, my preliminary investigation leads me to conclude:

No conspiracy there.
Clearly, Geller has no obligation to promote my websites, particularly if they espouse views with which he disagrees, and especially not after I mocked his stupid ad campaign. Nor do I have any interest in promoting his website by providing him with free content that may increase his site’s visitor traffic.
However, I would therefore recommend that Geller then change his site’s policy statement to be reflective of the fact that he’s banning submissions he deems inconsistent with his political allegiances (or which are critical of his venture), and cease presenting himself as an honest broker capable of holding unbiased and uncorrupted awards ceremonies. To that effect, Geller also has no justification in claiming that either his awards ceremonies, nor his site’s aggregation feed, are adequately representative of the broader Jewish blogging community and he should revise his Google Adwords campaign to be reflective of such.
Otherwise, I will personally see to it that legions of young Left-wing Jews click his pay-per-click advertisements endlessly, and teach him that there are indeed consequences for such unscrupulous behavior.
Furthermore, I would recommend that those Jewish bloggers who concur with my assessment and so too disapprove of Geller’s behavior remove themselves from JBlog Central’s aggregator in order to emphasize the principle that regardless of our theological and political disagreements, we are nonetheless one Jewish community, online and off, and that we are all welcome members of the community, deserving of inclusion, no matter where we stand ideologically. 12 tribes, 72 faces, one am yisrael. And that’s how it ought to be.