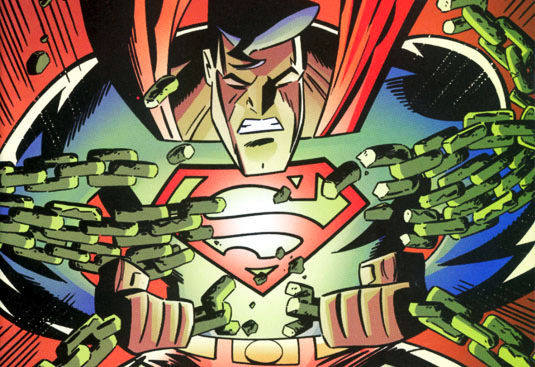 Guest post by Rabbi Simcha Weinstein
When you’re the rabbi of Pratt Institute, America’s most prestigious art school, and you want to gain some street-credibility with your students (and faculty!) it helps to have a secret identity as a comic book aficionado.
However, since the release of my book, Up, Up and Oy Vey!: How Jewish History, Culture and Values Shaped the Comic Book Superhero, my secret identity has been revealed. Now everyone affectionately calls me “the comic book rabbi”, the one-stop resource for all Jewperhero information.
So when I was asked for a superhero shpiel on Passover, one story immediately came to mind.
In a Superman story entitled “Miracle Monday” (Superman #400 1984) the citizens of sixtieth-century earth celebrate a festival of the same name:
“Across the galaxy tonight, wherever the human race has made its home, families gather for the Miracle Monday dinner — a celebration of our freedom!”
It’s a meal commemorating the legend of Superman, the hero who brought freedom to the oppressed and has now retreated into solitude. The narrator of the story writes that it is “a night of the year that is different from all other nights.”
Sound familiar? Clear parallels are drawn between Miracle Monday and the Passover Seder, right down to the empty place setting reserved for Superman, calling to mind the traditional Cup of Elijah. Phrases such as, “Let all who are hungry come and eat!” echo phrases from the Passover Haggadah.
Yes, even in fiction, we Jews are still worrying about when we get to eat. But the story has deeper undertones. After all, Elliot S. Maggin, the writer of this particular issue, is Jewish. One presumes that the many Passover Seders he’s attended helped influence this Superman story. Maybe one in particular…
In an article entitled “Remembering Julius Schwartz,” Maggin recounts a Seder he spent with that legendary editor of Superman, Batman and creator of the Justice League of America.
Maggin describes the Seder as, “the annual ritual dinner where you tell long stories about freedom and adventuring before you eat.” He recounts a fascinating encounter with his mentor:
“Julie had not been to a Seder in a number of years… There’s a crucial point at the beginning of the Seder ceremony when the youngest person at the table reads a short but rather difficult paragraph in Hebrew called the Four Questions… It fell to my youngest sister Robin to read the questions, and she never particularly enjoyed the role…
“‘I haven’t been to Hebrew school since 1928,’ Julie barked. ‘And watch this.’ He read the Four Questions in perfect Hebrew, beginning to end, without tripping over a syllable. So it was that the oldest person at the table asked the Four Questions this time. My father was thrilled — it brought us an entire whining-session closer to the food.”
Maggin’s fictional story “Miracle Monday” has a happy ending: the sincerity of remembrance moves Superman to return to beloved adopted home planet of earth once again.
It is comforting to note that many other Jewish comic book writers and artists have tapped into their religion when looking for inspirational sagas and archetypes. Let’s not forget that Superman was originally created by two Jews from Cleveland (but that’s another story.)
That’s why, as the comic book rabbi, I’m frequently asked the rather bizarre question: “Is Superman Jewish?” On one level, the answer is simple: “No, he’s a fictional alien.” However, when we look at the state of our world, we can understand the desire to create and admire heroes (but with superhuman powers for good.)
As we recount the story of Passover yet again, we recall the inspiring story of our ancestors, to remind ourselves that we are now a free people who hope for ultimate redemption. The Jewish people have been known throughout history as “the people of the book”. This Passover, let’s try (at least for a while) to put our faith and trust into something more tangible than fiction.
Rabbi Simcha Weinstein is the founder of the downtown Brooklyn Jewish Student Foundation. He is a much sought-after television and radio guest, appearing on CNN, NPR and WNBC and has been profiled in many publications, including The New York Times, The Chicago Tribune and The
Miami Herald. He is the author of the award winning book Up, Up and Oy Vey! How Jewish History, Culture and Values Shaped the Comic Book Superhero (Leviathan Press) and a forthcoming book on 21st century Jewish comedy that is to be published in fall 2007. Rabbi Simcha can be reached at rabbisimcha.com.

We Were Strangers Too