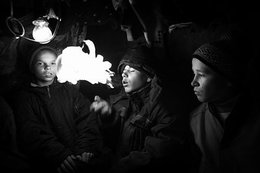 Skadarska, an easy slope of cobblestones just off Belgrade’s main pedestrian mall, was the street of bohemians, poets and artists in this fortressed capital of Serbia. Today, this bombed city’s Montparnasse is an understated tourist attraction, where cafes remain mostly empty, and the gray skies above give it a rush of inexorable macabre. I traveled to Belgrade with some friends who, after a sojourn in Budapest to meet with members of the Jewish community there, decided to trek 8 hours south to explore a different kind of Europe, one that lives on the periphery, like a Serbian Kiryat Shmona rushed through centuries of war, occupation, building and bordersmashing. The Jewish community of Serbia is an aging but vibrant one, and as always, is mostly made up of a Sephardic community with origins in Spain. Like other post-socialist Jewish communities, it has dwindled, and most of its members have emigrated. The cityscape is one of less glory than other European cities, and drab trams rumble loudly under disinterested mid-century buildings. Much like the rest of the Balkans, The Roma, or Gypsies, are moving into the spaces that Jew’s left empty. They often pack their lives into old synagogues and on top of cemeteries.
This was my second time in Belgrade, but this particular walk down Skadarska was a jarring one. While crossing into the quarter from a side street, I watched a police officer and a young Romani boy confront each other, the pre-pubescent boy digging his fists deep into the front of his pants, as if he had been caught soiling the curbside dumpster and now had to face the cop. Then, after the officer told him off for loitering in one of Belgrade’s most attractive streetscapes, he ran down near me to meet his comrades, all of whom were clutching flaccid bags of glue. They huff and huff, inflating the red plastic bags like the throats of some sort of neon lizard. Today, Serbia’s famous citizens aren’t dying in The Hague, they are barely living in the center of the capital.
I have long expressed my view that the Jewish and Romani people are linked by history, if not by destiny. Today, as always, the Roma are described a rogue anti-community of dark vagrants ruled by their slum’s incessant inability to enter civilization. In a record store in central Belgrade, a cashier tells me “Call me a racist, I do not like the Gypsies; they refuse to work, they are dirty, they steal. You may like them, but you do not live here. I have my reasons.” I see a century ago, when a Ukrainian saleswoman may have expressed a similar sentiment to a traveler about sidelocked youths loitering on the edge of Kharkov’s ghetto strapped with violins and brandy.

No Cities to Love: A D'var Torah on Cain