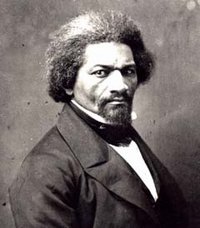 I recently read the Narrative of the Life of Frederick Douglass and it seems a fitting time to look at it again and think about the reality of slavery, the strategems of the master, and the way of the slave mindset. It is a must-read for every American and every Jew…
Here are some excerpts that are worth thinking about as we get ready for the Pesach seder.


***
The more I read, the more I was led to abhor and detest my enslavers. I could regard them in no other light than a band of successful robbers, who had left their homes, and gone to Africa, and stolen us from our homes, and in a strange land reduced us to slavery. I loathed them as being the meanest as well as the most wicked of men. As I read and contemplated the subject, behold! that very incontentment which Master Hugh had predicted would follow my learning to read had already come to torment and sting my soul to unutterable anguish. As I writhed under it, I would at times feel that learning to read had been a curse rather than a blessing. It had given me a view of my wretched condition, without the remedy. It opened my eyes to the horrible pit, but to no ladder upon which to get out.
In moments of agony, I envied my fellow-slaves for their stupidity. I have often wished myself a beast. I preferred the condition of the meanest reptile to my own. Any thing, no matter what, to get rid of thinking! It was this everlasting thinking of my condition that tormented me. There was no getting rid of it. It was pressed upon me by every object within sight or hearing, animate or inanimate. The silver trump of freedom had roused my soul to eternal wakefulness. Freedom now appeared, to disappear no more forever. It was heard in every sound, and seen in every thing. It was ever present to torment me with a sense of my wretched condition. I saw nothing without seeing it, I heard nothing without hearing it, and felt nothing without feeling it. It looked from every star, it smiled in every calm, breathed in every wind, and moved in every storm.
***
The idea as to how I might learn to write was suggested to me by being in Durgin and Bailey’s ship-yard, and frequently seeing the ship carpenters, after hewing, and getting a piece of timber ready for use, write on the timber the name of that part of the ship for which it was intended. When a piece of timber was intended for the larboard side, it would be marked thus — “L.” When a piece was for the starboard side, it would be marked thus — “S.” A piece for the larboard side forward, would be marked thus — “L. F.” When a piece was for starboard side forward, it would be marked thus — “S. F.” For larboard aft, it would be marked thus — “L. A.” For starboard aft, it would be marked thus — “S. A.” I soon learned the names of these letters, and for what they were intended when placed upon a piece of timber in the ship-yard. I immediately commenced copying them, and in a short time was able to make the four letters named. After that, when I met with any boy who I knew could write, I would tell him I could write as well as he. The next word would be, “I don’t believe you. Let me see you try it.” I would then make the letters which I had been so fortunate as to learn, and ask him to beat that. In this way I got a good many lessons in writing, which it is quite possible I should never have gotten in any other way. During this time, my copy-book was the board fence, brick wall, and pavement; my pen and ink was a lump of chalk. With these, I learned mainly how to write. I then commenced and continued copying the Italics in Webster’s Spelling Book, until I could make them all without looking on the book. By this time, my little Master Thomas had gone to school, and learned how to write, and had written over a number of copy-books. These had been brought home, and shown to some of our near neighbors, and then laid aside. My mistress used to go to class meeting at the Wilk Street meetinghouse every Monday afternoon, and leave me to take care of the house. When left thus, I used to spend the time in writing in the spaces left in Master Thomas’s copy-book, copying what he had written. I continued to do this until I could write a hand very similar to that of Master Thomas. Thus, after a long, tedious effort for years, I finally succeeded in learning how to write.

***
Slaves are like other people, and imbibe prejudices quite common to others. They think their own better than that of others. Many, under the influence of this prejudice, think their own masters are better than the masters of other slaves; and this, too, in some cases, when the very reverse is true. Indeed, it is not uncommon for slaves even to fall out and quarrel among themselves about the relative goodness of their masters, each contending of the superior goodness of his own over that of the others. At the same time, they mutually execrate their masters when viewed separately. It was so on our plantation. When Colonel Lloyd’s slaves met the slaves of Jacob Jepson, they seldom parted without a quarrel about their masters; Colonel Lloyd’s slaves contending that he was the richest, and Mr. Jepson’s slaves that he was the smartest, and most of a man. Colonel Lloyd’s slaves would boast his ability to buy and sell Jacob Jepson. Mr. Jepson’s slaves would boast his ability to whip Colonel Lloyd. These quarrel’s would almost always end in a fight between the parties, and those that whipped were supposed to have gained the point at issue. They seemed to think that the greatness of their masters was transferable to themselves. It was considered as being bad enough to be a slave; but to be a poor man’s slave was deemed a disgrace indeed!

***
A slave who would work during the holidays was considered by our masters as scarcely deserving them. He was regarded as one who rejected the favor of his master. It was deemed a disgrace not to get drunk at Christmas; and he was regarded as lazy indeed, who had not provided himself with the necessary means, during the year, to get whiskey enough to last him through Christmas. … The holidays were part and parcel of the gross fraud, wrong, and inhumanity of slavery. They were professedly a custom established by the benevolence of the slaveholders; but I undertake to say, it is the result of selfishness, and one of the grossest frauds committed upon the downtrodden slave. They do not give the slaves this time because they would not like to have their work during it continue, but because they know it would be unsafe to deprive them of it. This will be seen by the fact, that the slaveholders like to have their slave spend those days just in such a manner as to make them glad of their ending as of their beginning. Their object seems to be, to disgust their slaves with freedom, by plunging them into the lowest depths of dissipation. For instance, the slaveholders not only like to see the slave drink of his own accord, but will adopt various plans to make him drunk. One plan is, to make bets on their slaves, as to who can drink the most whiskey without getting drunk; and in this way they succeed in getting whole multitudes to drink to excess. Thus, when the slave asks for virtuous freedom, the cunning slaveholder, knowing his ignorance, cheats him with a dose of vicious dissipation, artfully labeled with the name of liberty.

I Introduce To You: Our Ghosts

In our mouths and in our hearts: Day 31