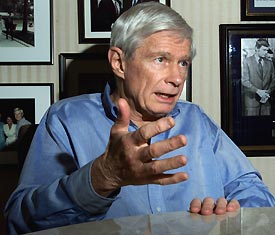 Every day, the presidential campaigns email to reporters press releases touting the endorsements they have most recently snagged. On Tuesday morning, the John McCain campaign, stinging from the news that its first-quarter fundraising efforts were anemic, zapped out word that GOP moneyman Fred Malek is joining the McCain team as a national finance co-chair. […] The McCain press shop left out an interesting piece of Malek’s history: when he counted Jews for President Richard Nixon.
[…] Nixon summoned the White House personnel chief, Fred Malek, to his office to discuss a “Jewish cabal” in the Bureau of Labor Statistics. The “cabal,” Nixon said, was tilting economic figures to make his Administration look bad. How many Jews were there in the bureau? he wanted to know. Malek reported back on the number, and told the President that the bureau’s methods of weighing statistics were normal procedure that had been in use for years.

Cutting edge AJC! (which one?)

A Failure As A Jew