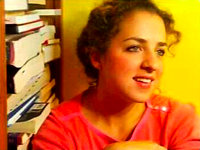 TruthTellers.org is the website of the National Prayer Network, an organization headed by the Rev. Ted Pike, an Evangelical minister who spends pretty much all of his time crusading against hate crime legislation and raving about how other Evangelicals are sell-outs for befriending the Jews. The website’s primary contributor, Harmony Grant (incidentally, Pike’s niece), writes chiefly about the alleged ills and evils of the Jewish community (as ordained, of course, by God-defying “Talmudists”), our supposed war against Christian America, and our purported “genocide” against the Palestinians. In other words, Grant is a class A1 Jew hater. So this ought not to be surprising…
Last month, in advance of the Easter holiday, Shamirpower posted a bit of satire by Rabbi Rami Shapiro in the form of a generic “letter to the editor.” Responding to a flurry of reports that towns across America were renaming their Easter bunnies “the Spring bunny” in order not to offend non-Christians, Shapiro recommended that people write letters to their local papers, like his own, demanding the Easter Bunny retain both its name and glory.

Yet there are some among us who insist on waging war on Easter. This is a bad idea. First, we haven’t the resources to run a two front war, and our winter campaign in the War on Christmas is only eight months away. Second, the attempt to take the Christ out of Christian is going to force us to take the Jew out of Jewish as well. We will be a nation of ian and ish, and where is the fun in that?
[…] America is not a Christian nation, but it is a nation of Christians. Let them have their resurrection bunnies. Don’t complain when they commit symbolic genocide against rabbits by eating their eggs. Don’t make fun of their hats. And above all don’t pretend to have found the bones of Jesus when everyone knows both he and Elijah were taken up bodily into heaven leaving no DNA behind.

The piece was clearly a joke. It was humorously and absurdly written from the outset. And it advocates that the Easter Bunny stay named the Easter Bunny.
But to Grant, not only was Shapiro not joking, he also said the complete opposite of what you see clearly written above. Indeed, on Monday, Grant sent the following news alert to the National Prayer Network’s mailing list:

Last year, the human-rights director for the city of St. Paul removed an Easter bunny displayed by a secretary. “I sent an email that Easter is viewed as a Christian holiday and advised that it be taken down. It wasn’t a big deal,” the director said. (Michael Barone, US News & World Report blog, April 2006)
But it is a big deal. Christian symbols are apparently too offensive to be seen. According to www.jewschool.com, Rabbi Rami Shaprio is encouraging everyone to write their local papers and demand that Easter bunnies everywhere be renamed. It doesn’t take much. In 2001, a Jewish resident of Walnut Creek, CA, complained about the Easter bunny. After this single complaint, the city renamed it the “Spring Bunny.”

Setting aside the fact that the Easter Bunny is a pagan symbol and not a Christian symbol; to use Shapiro’s satire as evidence of a Jewish conspiracy against Easter indicates that Grant is a woman so blinded by hatred she can’t even clearly read the text on the screen in front of her.
When I first learned of this, I wasn’t terribly upset by it, figuring, hell, who pays attention to these maniacs anyway? But now that I see that this lie is making its way across the Internet, appearing, for example, at Rense.com, a popular but thoroughly insane conspiracy theory website, and by way of Rense, that it’s making its way into the blog posts of other deluded Jew haters, I just want to clear things up.
Rami Shapiro did not encourage “everyone to write their local papers and demand that Easter bunnies everywhere be renamed.” He encouraged people to write their local papers making fun of fools like Harmony Grant, John Gibson, and Bill O’Reilly, who are all bent out of shape over a war on Christianity that they themselves are fabricating, and who, in the process, are stirring up hatred against Jewish Americans.
There is no war on Christianity. Nor is there a war on Christian symbols in the public sphere (a handful of pissy and inconsiderate Jews does not a war make). There is, nonetheless, a war on bigots like Harmony Grant, and I for one am a proud soldier in that war: The war against religious and racial hatred.
And that’s a war we’re gonna win.

On Sexual Harassment and the Religious Pedestal