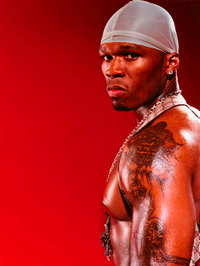 Looks like there’s a new craze in the publicity-winning social faux pas. Taking a page from Micheal Ray Richardson’s playbook, bullet riddled gangsta rapper 50 Cent would like to let you know that his lawyers are Jewish. And vicious.
The NY Daily News reports,

Hip-hop artist 50 Cent added his two cents on the Tony Yayo assault case – and inserted his foot in his mouth at the same time.
Yayo, a member of 50 Cent’s notorious G-Unit crew, was arrested last week for allegedly attacking the 14-year-old son of music industry rival Jimmy (Henchmen) Rosemond last month in Manhattan.
50 Cent called into “Miss Jones in the Morning” on Hot 97 yesterday and said the 29-year-old Yayo’s troubles won’t hurt his crew.
But then he added, “Worry about the Je-Je-Je-Jew unit. They’re the real goon squad. When the lawyers come out, you’ll see what it is. I don’t pay nobody. I only pay the lawyers.”
Fitty said neither he nor Yayo had anything to do with the assault.

According to a contributor to AllHipHop Rumors,

I heard that Shady Records [Eminem’s record label] actually started this Jew-Unit thing a few years ago in 2004. From what I was told (but haven’t confirmed), Shady printed up some T-shirts and they said “Jew Unit” and on the back it said “Get Rich and Don’t Spend It.” I don’t know if this is true, but from what I understand, Jewish people there actually made the T-shirts. It wasn’t meant to be offensive, just funny. Nowadays, people are offended.

This is Solidarity of Nations – Achvat Amim