From guest contributor TheWanderingJew:
I have never taken for granted the fact that I was raised in Canada, in the big cities, to liberal parents. Some of my earliest memories involve one of my parents’ gay friends who helped my nanny take care of me when my parents were on vacation in Europe: He picked me up, on a weekend morning, and took me to my pottery lessons. After my class, before returning me to my home, he bought me ice cream. This was a huge deal: it was not yet noon, and I had not yet had lunch. In my family, dessert was for special occasions, and we certainly weren’t allowed sweets before lunch! At the ripe old age of 4, I didn’t know what “gay” meant, but I knew that adults used that word when referring to this family friend and his housemates (I later clued in that they were two gay couples sharing a house). So in my young mind, I equated “gay” with “sweet before lunch” which meant “cool.” A formative experience, to be sure. I went on to attend both elementary school and high school, in different cities, with queer teachers of different genders, and at least twice had students in my class whose gender (to this day) remains unknown. All of this was fully accepted, encouraged, and supported. It wasn’t a big deal when I came out; the first pride parade I marched in was captured on film by my math teacher and her partner, who cheered as I walked by with an LGBTQ youth group.
Which isn’t to say that my life has been untouched by homophobia. I was once attacked by a group of guys, who shouted homophobic slurs as they took their swings and kicks. I lived in a small town where homophobia was as “natural” as drinking beer. Once while sucking a popsicle in my car, another driver shouted “faggot” as he passed me by (okay, that one might have been called for!).
But I’ve written those off as isolated incidents that were few and far between. I was able to balance them with the activism and volunteer work I was doing to educate my communities on issues relating to homophobia, heterosexism, heterocentrism, transphobia, and more. Work I’ve been doing for more than half my life. 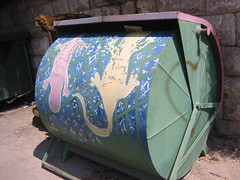 Living in Jerusalem, however, I’m having a hard time compartmentalizing, pushing down, the rampant homophobia. It started my first day in Jerusalem, walking from Rehavia to Mahane Yehuda. Scribbled on a paper recycling bin was “homo = ill,” “homo = filthy,” and “homo = dog.” I was shocked. In a city where destruction (or amelioration) of public property, through graffiti and stencil art, for political statement or “just” art, was the norm, I couldn’t believe that no one had challenged this message. As I continued my exploration of the city, I found that this message was repeated on paper recycling bins, electricity boxes, telephone poles, walls, gas metre boxes, and other public places, not just in Rehavia, but in Baka, Nachlot, Katamon, Germany Colony, city centre and Ben Yehuda, and more. I was able to determine that the hatred was all being written by the same hand. 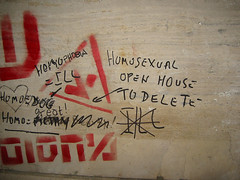 I quickly devised a plan, supported by friends, to correct the graffiti. We started carrying permanent markers with us and changing the message from “homo = ill” to “homophobia = ill.” But the more we changed, the more we had to change. On streets where I had corrected every then-marked-up spot, a second walk a few days later would reveal new, bolder, places where the hatred was being displayed. And tonight I noticed that some of my corrections had been amended. “Homo very dangerous for children.”
I feel like I’m loosing this fight. I could keep writing messages back, correcting what has now been written to counter my anti-homophobia corrections, but it’s becoming overwhelming. This individual clearly has a lot of time on his/her hands, and I almost feel like I’m being watched or followed as I walk around making these corrections.
If you’re in Jerusalem, I implore you to take a sharpie in hand and correct them as you see them (or just cross them out). It’s exhausting living in a city where messages of hate are scribbled everywhere I look, and even more exhausting feeling like no difference is being made. If things don’t turn around soon, I think I’ll be taking this story to the press.