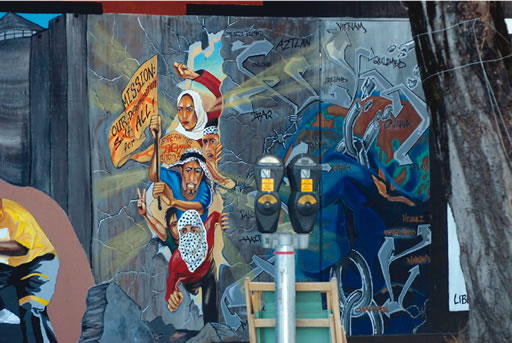 The San Francisco Jewish Community Relations Council (JCRC) and the SF office of the Anti-Defamation League pressed the SF Arts Commission to change what they deemed offensive imagery in a new mural made by some 200 residents of San Francisco’s diverse Mission district under the auspices of HOMEY-Homies Organizing the Mission to Empower Youth.

JCRC’s Abby Porth said, “The imagery took a radical position on a complex geopolitical issue that was out of touch with the international community, San Francisco and the overwhelming majority of Jews.”
In fact, a number of Jews in the Bay Area took issue with either any efforts to change the mural, or the range of objections to the mural presented by opponents, and testified to that effect at the recent Arts Commission hearing.

Full story.
Here’s how the story ended, from the Examiner:

HOMEY and [artist] Norberg, however, have agreed to alter the images that some called divisive and hostile. The group has agreed to change the shape of the crack so it does not resemble a silhouette of Israel, add blue sky where the wall towered to reflect a brighter future, add an olive tree to symbolize peace, and remove the headscarf from the woman’s face. The Arts Commission approved the revisions Wednesday.
“Our intention was to draw parallels between the issues at the U.S.-Mexico border and the Israeli-Palestinian security barrier,” said Nancy Hernandez, youth program coordinator at HOMEY. “We consider this section … to be a statement of solidarity between the residents of the San Francisco Mission district and global movements for oppressed peoples to gain self-determination.”

The Hegemony Of Violence In Israel-And/Or-Palestine

Launch Party for the Only Independent Voice of Student Jewry!