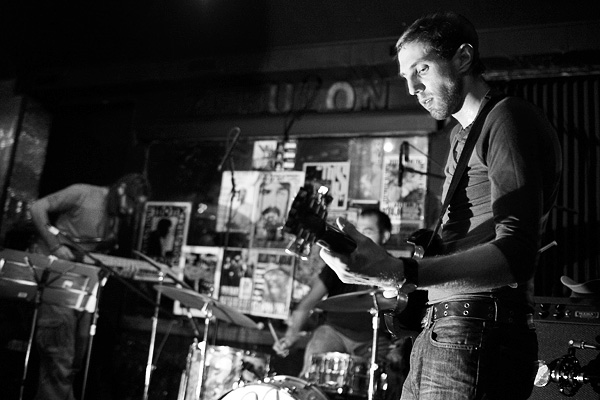 I know little about music, but I’m happy to talk about a good time under the influence of chords if I can. And attending PITOM’s performance in Brooklyn’s Zebulon on August 22nd was a fun experiment in new Jew tunes that defy genre.
You can read a little about their sound via the extended metaphor below, or hit their show Tuesday night yourself:
WHEN: Tuesday, Sept. 25th, 8:30pm
WHERE: Parkside Lounge, 317 E. Houston between Ave B and C
Cover? No way.
PITOM says about itself that if you toss Zorn, Zappa and Ziggy Stardust into a blender, you might hear this. But all I can do to relate Yoshie and his band’s sound with my musically-uneducated vocabulary is to say that if Ocean’s 11 were about an all-star band of misfit Jewish theives, this would be the soundtrack.
The first song opens the scene of some minor heist — a bit of klez punk to keep up with the action, lots of drumming, an Ashkenazi appeal in the interlude to highlight some successful on-screen venture, culminating in the feeling that if the rebbe’s rebel son wrote punk, it might sound like this.
When the song “Go Go Golem” kicks in, so does the movie plot, with metal band echoes, dominated by a low base, the shimmering of cymbols — no doubt to intro the villain — and the plaintive whine of violin just to contrast the protagonists’ plight. (By the way, the band member who has the most fun is clearly the drummer, grinning like a villain himself whenever granted a drum solo.)
Of course, there is a little love story to (Jew)cean’s 11 — or 12 or 1200, whatever sequel we’re watching these days — and the Basanova swing influence plays appropriately. Even the punk-averse couple sitting next to me in Zebulon were doing a little feet tapping to the fiddle. Meanwhile the frumsters and kipah-free heads bobbed aplenty and unashamed.
Perhaps it’s my overactive imagination that completes PITOM’s fast-moving set with a fitting Ocean’s-style montage ending where one can envision the protagonists watch their carefully laid plans unravel spectacularly and only a wisecrack to save the mood. Only the hidden brilliance of counter-counter-plans which move as fast as Yoshie’s fingers across that electric guitar can save the end of the movie in time to fit with the climactic drum and base rumbles — our heroes dance offscreen with class and style, like the menschly gentle-theives that they are. The names Yoshie Fruchter, Shanir Blumenkrantz, Jeremy Brown and Kevin Zubek scroll past in the credits and you leave the theater with that punk jazz stuck in your head all the way home. I highly recommend taking a listen on Tuesday night to describe their sound yourself, it’s just too fun trying to label it.
Check out their MySpace page here and join the mailing list to be kept abreast of their next heist.

"Editor-in-chief emeritus" – and still no better at fact-checking