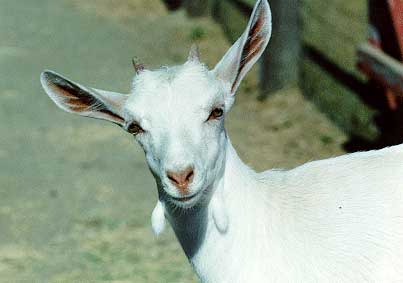 We all have a huge amount to say about the goats. I’m not sure that this was planned, but in some ways, this topic has nearly taken over the Hazon Food Conference. And I do not think that this is necessarily a bad thing. The questions that have arisen throughout the past years, regarding the ethics of eating meat – especially kosher meat produced in factory farms, slaughtered in places like Agriprocessors, where the heart of kashrut seems to have bled right out are questions which are just right for the people of this new Jewish sustainable food movement to address.
And while there is a lot going on at this conference, your intrepid livebloggers (YehuditBrachah, KungFu Jew and KRG) have set aside an entire post to talk about the shchita and the conversations surrounding it.
Thursday night, the first night of the conference, Nigel Savage of Hazon started out by explaining how it came about that it was decided to shecht a goat this year at the food conference. Last year during the conference, Nigel asked meat eaters if they would still eat meat if they had to participate in the death of the animal: some said yes, others: no; he then asked the veggies if they would eat meat if they were part of its slaughtering: again, some said no, but others, yes. From this arose the idea to try to humanely schecht a goat at the Hazon Food conference.
That is how Nigel introduced the first panel of the conference: a panel including a shochet, Rabbi Yehuda ben Chemhoun, Rabbi Seth Mandel of the Orthodox Union, who oversees all American slaughterhouses, the shepherd who raised the goats Aitan Mizrahi, the woman who continued to shepherd them when the shepherd separated them from their dams (he is a dairy farmer, and this is how female goats are kept giving milk) Rachel Gall, Dr. Shamu Sadeh of Adamah and Simon Feil.

Language at Drisha (and beyond etc.)