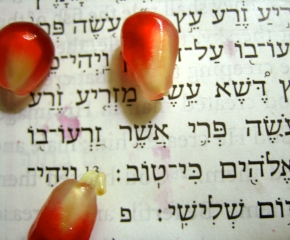 Photo by Miriam Rubin, posted on Jew and the Carrot
Greetings from the Hazon Food Conference. Your live blog team is furiously typing away between the Latke Vs. Hamentaschen debate and the contra dance.
I came here to the conference not sure what to expect. I had sponsored some friends in Hazon bike rides over the years, had read the Jew in the Carrot occasionally when it linked to Jewschool, but didn’t know exactly what Hazon did. I came because someone donated conference fees for several rabbinical students, because I love hanging out at Izzy F, and because I love food.
What I’ve realized is that I am part of a new movement: the New Jewish Food Movement. I already belong to an organic vegetable coop in Boston, avoid processed foods, buy at Trader Joe’s and Whole Foods, buy organic as much as I can. I try to buy food and products with good labor records, and I spend hours cooking food in my kitchen in a given week. I grew up picking apples in the fall and hearing stories from my mother about how she would go with her grandfather in a truck out to Western Mass to get vegetables from the farmers for his fruit and vegetable store in Dorchester. Connecting to food just makes sense to me.
Here this weekend are Jewish farmers, chefs, organic entrepreneurs, ritual slaughterers, CSA champions, homesteaders, bobo Whole Foods shoppers, amateur foodies, and everything in between. What we all have in common is that we are concerned with what has happened to our food in the past 50 years: the agribusiness meat producers that now cage animals and pump them full of hormones to prevent them from dying from their living conditions; the destruction of indigenous communities by factory farms’ clear cutting rain forests for monoculture and paying workers slave labor wages; the huge environmental cost of shipping exotic products from around the world; the basic disconnect between people and their food. There’s a palpable excitement here. People can taste the future, and it tastes organic, it tastes local, it tastes healthy and just.
I had wondered, honestly, about whether this food movement could really take hold. Having done work in the labor movement and having studied poverty in America, I couldn’t help but think how Whole Foods and the like are way out of many people’s price range. Chef Dan Barber of Blue Hill at Stone Barns restaurant addressed the question of sustaining the organic food market this way: one person asked during his talk, in a rather roundabout way, how could people afford to eat organic and local on a daily basis.
“You’re really asking am I an elitist snob, aren’t you?” The woman answered “no…”
“The answer is yes, I am an elitist snob. I realize that many people cannot afford to buy this food. But I’m not trying to reach them. I’m trying to reach the people who think that they can’t afford to buy it, but who really can. If I had told you twenty years ago that in 2007, there would be 90% penetration of cable TV, you would have said I was crazy, why would people be willing to pay $110 a month for a service that is essentially free? And if I had said the same thing about cell phones, first you would have said what’s a cell phone, and then you would have said I was crazy, why would someone pay an extra $90 a month for a service that is essentially free? But somehow over the past twenty years, the average American has found an extra $200 per month for things they didn’t think they needed twenty years ago. It’s those people I’m trying to reach: the people who ten or twenty years from now won’t even consider not buying organic, local, and fair trade.”
I will leave here inspired to make change, both in my own lifestyle and also in my city and Jewish communities. I know who to contact to learn more about creating sustainable simchas in the Jewish community (in addition to Ruby K!). I know that there is a whole network of Jewish farmers from the Jewish Farm School in Philadelphia to Kayam Farm in Baltimore to Rabbi Shmuel Simenowitz at Sweet Whisper Farms in Vermont. I witnessed two men, one with a plot of land in Vermont in need of farming and the other a Jewish farmer, plan to collaborate in bringing to life a Jewish farm retreat. For the first time, I could sit before a plate of food (my portion of goat meat from Friday night dinner), close my eyes, and actually imagine the whole process from live animal through slaughter, skinning, gutting, butchering, cooking, and serving.
The story of Chanukah tells of the Jews returning to the Temple and finding only enough oil for one day. The miracle is that the oil lasts 8 days. When I lead the kavannah for Chanukah candle lighting this evening, I wanted us to think differently about what exactly the miracle was. I don’t think the miracle happened when the oil lasted 8 days. I think the real miracle is that when the Maccabbees saw that there was only enough oil to last one day, they lit the menorah anyway. Instead of saying, “Oh look, this won’t last, let’s not bother,” they said, “We have faith that this is bigger than us, that this has lasting power, and we are going to bring light to this space.”
Whether this post is the first time you are hearing about any of these issues or whether you are already enmeshed in the Jewish food movement, I challenge us all this Chanukah to rededicate ourselves to taking that first leap of faith, that first step toward a more sustainable, environmentally sound, just, and healthy food lifestyle.