From today’s New York Post:
When Walter Adler of Brooklyn boarded a subway at Canal Street towards home with his girlfriend, Maria Parsheva, and two friends someone in another group wished them “Merry Christmas.” They responded, “Happy Hanukkah.” Not exactly fighting words to most people, but according to Adler, one of the group immediately hiked up his sleeve to reveal a tattoo of Christ and said, “Happy Hanukkah, that’s when the Jews killed Jesus.” This guy and his buds -about 14 men and women- then allegedly began calling Adler and friends, “dirty Jews” and “Jew bitches, ” and six of them were later arrested for assault.
According to the Post, “They just came at us so fast. The first thing that came into my mind was, ‘Yeah, this is going to be violent,’ said Parsheva, 20.”
Hassan Askari, 20, a Muslim from Bangladesh, jumped in to defend Adler.

“Walter Adler was touched that Hassan Askari jumped to his aid while a group of thugs allegedly pummeled and taunted him and his three friends. So Adler has invited his new friend over to celebrate the Festival of Lights.
The two new pals – Adler, 23, with a broken nose and a fat lip, and Askari, 20, with two black eyes – broke bread together and laughed off the bruises the night after the fisticuffs.
“A random Muslim guy jumped in and helped a Jewish guy on Hanukkah – that’s a miracle,” said Adler, an honors student at Hunter College.
“He’s basically a hero. Hassan jumped in to help us.”
But Askari, who is studying to be an accountant, shrugged off the praise.
“I just did what I had to do,” he recalled. “My parents raised me that way”

All I want to add is that I wouldn’t have called it a miracle, but it’s nice to hear some publicity about a Muslim and a Jew that can be wrapped up “all’s well that ends well,” and maybe a new friendship in the making.
In the name of the most Merciful, may we all come to break bread together in friendship. 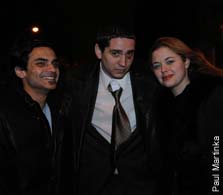 Oh, yeah, and can some priest or minister step forward to at least teach these “Christians” that “nativity” means “birth?”

Yet more on heter, shmetter