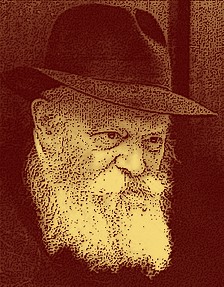 Earlier this week, we posted a little American trouble for the Lubavitch (or perhaps it’s the end of the trouble, hard to know how to frame it).
Now, there’s more. Apparently this is their fifteen minutes. Or something.
First, England’s Jewish Chronicle notes that England’s Lubavitch movement is in some serious economic trouble: apparently because of pouring an enormous amount of money into a new club for young Jews that they opened this year. Apparently nearly all the donations they received this year went into said club, “including ‘almost all’ of this year’s Â£750,000 yield,” leaving them Â£1.5 million (that’s 2,959,951 dollars American) in debt – and of course, they’ve had to close the club, in addition to leaving their teachers unpaid since April (although donors have now stepped in to pay the teachers’ wages).
In Israel, though, they’ve got different problems. Or, perhaps it’s the same problems that they’ve got here. Apparently it’s just gotten out that there may be problems with the beliefs of some Lubavitchers regarding their former (or not) rebbe. The Jerusalem Post reports that a former FSU immigrant who was not Jewish , but was eligible under the law of return, had become interested in converting and studied in a meshichist Jerusalem ChABAD yeshiva.
About two weeks ago, he appeared before a beit din (rabbinic court) for his conversion. He had nearly finished, when one of the rabbis asked him if he believed that the rebbe was the messiah. He answered yes, that that was what he had been taught, and the court refused to convert him.
The JPost says, ”

… a source in the State Conversion Authority said that at least two leading religious Zionist rabbis ruled that messianic Chabad was beyond the pale of normative Jewish belief.
“They [messianic Chabad Hassidim] attribute to him supernatural powers years after he passed away. That is not Judaism. It’s something else.”
Chief Sephardi Rabbi Shlomo Amar will be asked to decide this weighty theological question and in the process pass judgment on thousands of members of the messianic stream within Chabad Hassidism who believe that Rabbi Menachem Mendel Schneerson, who passed away in 1994, is the messiah.

This according to the article; I have heard an (unsubstantiated as of yet) rumour that, in fact, Rabbi Amar has ruled against the conversion applicant, and thus, essentially declared meshichist Lubavitch treif. I am curious as to what effect will this have on ChABAD: Is this a recognition that some beliefs are outside the pale, even if the holder of said beliefs has the outer appearance of Orthodox praxis? What effect will this have on the yeshivot that are still er, offering this perspective, either in Israel or the USA?
By the way, speaking of treif, Rubashkin (who is owned by the ChABAD Lubavitch Rubashkin family just to be on topic), has apparently had its teudat kashrut yanked by KAJ (HT to Failedmessiah)

In Which Sexism Remains Mysteriously Present.