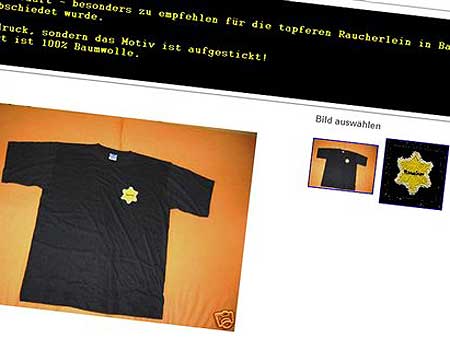 Opponents of Germany’s new smoking ban have appalled Jewish leaders by selling more than 1,000 “smokers’ T-shirts” that display a yellow Star of David and suggest that discrimination against nicotine addicts is like Nazi anti-Semitism during the Third Reich.
The controversial T-shirts went on sale on an internet site in the run-up to a smoking ban which came in to force in 10 of Germany’s 16 federal states on New Year’s Day. Its promoters insisted that Germany needed to be woken up to what it described as “disgraceful discrimination against smokers” in bars and restaurants and claimed that its shirts were “the most aggressive smokers’ resistance shirt available”
Photographs of the T-shirts show them displaying a yellow Star of David identical to the Judenstern, or “Jewish star”, that the Nazis forced all Jews to wear in Germany after they were elected to power in 1933. The word “Jude”, or “Jew”, which was inscribed in the centre of the Nazi stars, is replaced by the word raucher, or smoker..

Almost as bad as all the “Bush & Olmert are Creating a New Holocaust” signs I saw last week.
Full story.

More fun for Jews around the holiday season

An Open Letter to Rabbi Steve Gutow: An Unaffiliated Jew's response to "Why We Need a Liberal Israel Lobby"