If you’re able to get to Tel Aviv tomorrow (Sunday) or Haifa next weekend, you ought to check out “South Coast.” I caught tonight’s screening at the Jerusalem Cinematheque and really got into it. 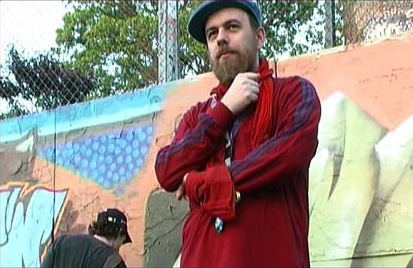 A feature length documentary, it explores the 25ish year history of hip hop in Brighton, England, comparing it to the scenes in the US (“east coast” and “west coast” America lend to the film’s “south coast” England title), London, and other parts of Europe. Listen to good music, watch some amazing break-dancing, see local writers and graffiti artists, and throw in a tonne of archival footage and interviews, and you too will be an expert on the south coast hip hop scene.
Thanks to the Hebrew subtitles, you can also chalk it up to an, um, educational viewing: learn new slang that you might otherwise miss out on. Learn the hip hop culture jargon – dis haters, curse, bboy and pop, and scratch – b’ivrit. (If only I’d brought a notepad!)
“South Coast” has recently picked up Israeli distribution and will be showing on more dates and screens in the near future. Check out the website for more details. In the meantime, you have two more chances to catch “South Coast” (“Ã¤Ã§Ã¥Ã³ Ã¤Ã£Ã¸Ã¥Ã®Ã©”), and ask the director, Will Jewell, questions after the screening, as part of the 7th British Film Festival.

What would Henrietta Szold do?