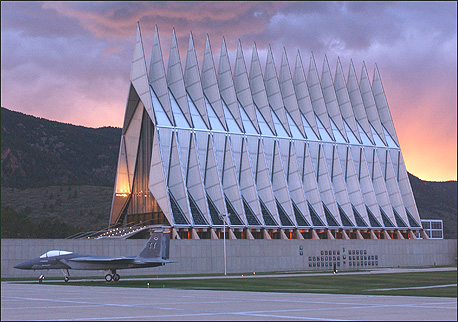 Reports of religiousÂ impropriety in today’s U.S.Â military appear with the regularity of abuse reportsÂ from Rubashkins meat plants. Unlike the Agriprocessors scandal, however, the problem ofÂ Evangelical Christian influence in places like the U.S. Air Force Academy has attracted little Jewish attention and less organized response, except from the Military Religious Freedom Foundation and its founder, retired J.A.G. Michael Weinstein.
The latest issue exposed by the MRFF is the invitation of three Arab converts to Christianity to speak at a weeklong conference on terrorism organized by cadets at the Air Force Academy. The three speakers, Walid Shoebat, Kamal Saleem and Zak Anani, claim to be reformed Islamist terrorists and “have appeared numerous times on Fox News Channel, The 700 Club, the Pastor John Hagee program and other venues in which they engaged in embellished stories of their conversion from Islam to Christianity, extolling its virtues and the wholesale denigration of Islam and its followers,” according to the MRFF’s Richard Baker.
The Academy’s official story, on the other hand, as related byÂ spokesman Brett Ashworth to a NY Times reporter, is that “the three were invited because ‘they offered a unique perspective from inside terrorism,’… [and that] the conference is to result in a report on methods to combat terrorism that will be sent to the Pentagon, members of Congress and other influential officials.”
There must be individuals out there with more reliability than Shoebat, Saleem, and AnaniÂ who can provide that kind of perspective, however, considering that experts who have heard them speak have serious doubts about the stories they present:

“Academic professors and others who have heard the three men speak in the United States and Canada said some of their stories border on the fantastic, like Mr. Saleem’s account of how, as a child, he infiltrated Israel to plant bombs via a network of tunnels underneath the Golan Heights. No such incidents have been reported, the academic experts said. They also question how three middle-aged men who claim they were recruited as teenagers or younger could have been steeped in the violent religious ideology that only became prevalent in the late 1980s.

Prof. Douglas Howard, who teaches the history of the modern Middle East at Calvin College in Grand Rapids, Mich., heard Mr. Saleem speak last November at the college and said he thought the three were connected to several major Christian evangelical organizations.

‘It was just an old time gospel hour — “Jesus can change your life, he changed mine,” ‘Â Mr. Howard said. ‘That is mixed in with “Watch out America, wake up America, the danger of Islam is here.” ‘

It used to be that “systemic violations of the First Amendment withinÂ the U.S. military” was a nonsensical term, too.

For more information and ways to support the MRFF, see their website, which also features ongoing coverage about their campaigns.

Salon.com has a great feature article on Michael Weinstein and the experiences that led him to start the MRFF at http://www.salon.com/news/feature/2006/12/13/weinstein/Â .