First, we had January 4th, which saw Jonathan Chait from the New Republic saying “It’s over”:

And now, it seems that more than a few bloggers are beginning to predict the previously thought improbable (if not impossible) — Obama defeating Clinton in the primaries, and winning the Democratic Party’s nomination for the election.
Cogitamus, source of the above video, does a little math:

Even if Clinton manages a narrow loss, tie, or narrow win in Virginia, Barack Obama should win Maryland and DC handily. Combined with a likely big win in one of his home states (Hawaii), he’ll have roughly a 100 delegate lead going into the Wisconsin primary. Let’s be pessimistic and assume Obama loses by 15%. With 75 pledged delegates, that means his lead will drop to the high 80s.
We’re now all the way to the Ohio and Texas primaries, with a total of 334 pledged delegates at stake. To claw back to a draw, Hillary Clinton will have to win a whopping 61% of them. There’s no way that can happen… 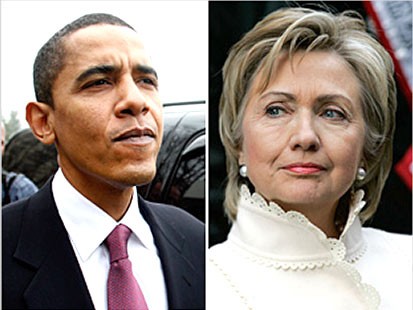 What I thought was inevitable, the nomination of Hillary Clinton by Democrats, now seems unlikely. Obama wins several contests tonight and will probably sweep Tuesday’s “Potomac Primaries”. Clinton’s campaign is in financial trouble and those high-value politicians that endorsed her haven’t delivered the number of states and delegates necessary to win.

Babalú also notes — even Intrade.com is putting the likelihood of an Obama nomination at around 65%. (This is up from being at between 60-62 percent on Friday.) Even the conservative RedState.com said flatly, “Hillary Clinton will not win the Democratic Presidential nomination” on the first try.
While I don’t want to jump the gun, I can’t ignore that even the New York Post is saying that Obama could “yet pull off” the nomination. (Some people were saying this way back in the day as well.)
If this momentum keeps up, perhaps Obama will be to voters this fall the “real choice” he alluded to on Super Tuesday after all.

An Elections Prayer for 2016