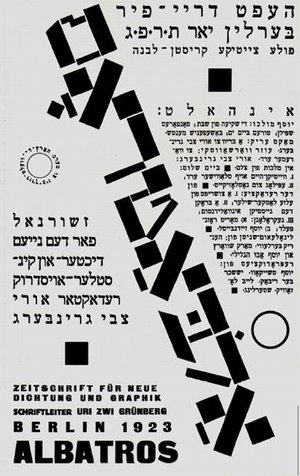 The cover of Albatros, drawn by Henryk Berlewi. Albatros was a interwar journal for new writing and graphic arts. Edited by Uri Zvi Greenberg. Berlin (1923)
By the time that painter, typographer and critic Henryk Berlewi’s work appeared in New York City in 1976, it was half a century after he made clear his artistic theory, and nine years after his death. His theory, Mechano-faktura, claimed:
Space is an illusion. Two dimensionality is the artist’s goal. Colors are reduced to black, white and red, and images are produced through mechanical means using rhythmic arrangements of lines and simple geometric forms, like circle and squares.
He was a pioneer of Yiddish modernism in an ideological hurricane season. By 1928, Berlewi, known today as a brilliant creator of posters, book jackets and page designs in Yiddish and Hebrew, was close to major Jewish artists and writers of his time – Alexander Wat, El Lissitzky, Peretz Markish, Uri Zvi Greenberg and Anatol Stern. His work represents a time when Jews participated zestfully in the cultural life of Europe, and more importantly, saw in this participation an opportunity to create a uniquely Jewish art. As those before him, he challenged the second commandment, suggested the possibility of a national aesthetic and smoked countless leaves on the streets of Paris- to be a Jewish artist, influenced by Europe while nourishing its soul with beauty. Berlewi, who is remembered today by only a few scholars, is better remembered as a Jew for all of us. More of his images are below.
Composition in Red, Black and White (1924) 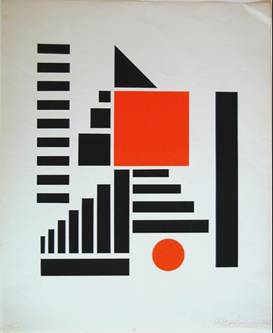 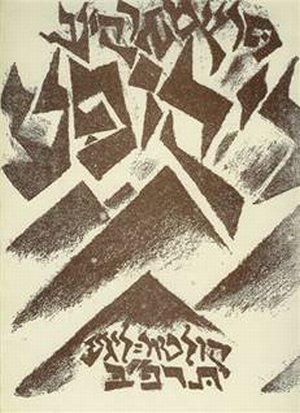 How bout these in the lobbies of new Jewish institutions, so that our youth are nourished by his experimentation and rebellion?