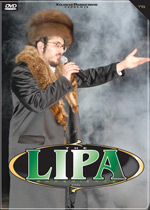 There were many times when we worried that one move too far into the mainstream, one step beyond the very traditional bounds of the Orthodox world, could bring a ban on a certain very tall Hasid. We took a lot of questions to the Bet Din at 770 and respected the answers they gave, but always, always, I had this concern. Seems in another part of “the Jewish music jungle” (Thanks frumhouse, i love that term), just such a ban has been decreed. Does anyone care? Will anyone follow it? I just find this too intriguing not to share…
Have you heard of The Big Event? If so, for the love of Hashem, write a comment and chime in. I love how the Ultra-Orthodox world can randomly swing into Madison Square Garden and it flies totally under the radar of the rest of the Jewish world. Apparently, it is/was a concert planned for March 9th featuring frum music favorites headlined by Lipa Shmeltzer. Lipa really is a King. A wedding singer and simcha entertainer, he gained prominence with his lighthearted rewrites of secular tunes as newly Kosherfied hits in both Yiddish and English. He performed at a friend’s wedding and while his “Yo Ya” was good, he really got me with version of Melanie C’s “I turn to you.” Apparently you can make it Jewish simply by adding “Hashem” before the phrase. ANYWAYS…
I’ll let the frum bloggers explain from here:
Frumhouse:Basically, the current king of the Jewish music jungle, Lipa Schmeltzer, has been deemed too wild by certain factions of the orthodox community. Furthermore, these factions believe that current Jewish music has become goyified (my word, not theirs). Songs that stem from non-Jewish melodies, even if the words and taam have been changed to elevate their kiddusha, are deemed inappropriate for kosher Jewish entertainment.
This concert and future Jewish music concerts have been banned by a group of about 35 rabbanim. They also prohibit people from hiring any performer who participates in the Big Event Concert.
Lipa speaks out: I have recently started learning Bichavrusa with a leading Rosh Yeshiva, and I promised him that I will never sing any songs which were composed by non-Jews. Being true to my word, I have sang at more then a dozen Chasuna’s since I made that decision – and I have not sang “Yidden”, “Abi-Mileibt”, or “Numa” (Rabbi Nachman M’uman) or any other song that is questionable as to its origin.
The really ironic thing to me about this is many Hasidic niggunim, and most Jewish music in general, doesn’t come from exclusively Jewish sources. We are a people with a tradition of song as a vital form of expression in our lives. But with the exception of Torah cantillation as a system of musical notation and musical modes of prayer, as a Diaspora people our appropriation of the culture of our various host communities is inevitable. What makes Klezmer more Jewish than pop songs about Hanukkah? What makes pining for Hashem to the tune of a French Revolutionary War March more Kosher than pining to Hashem to the tune of an ex-Spice Girl?