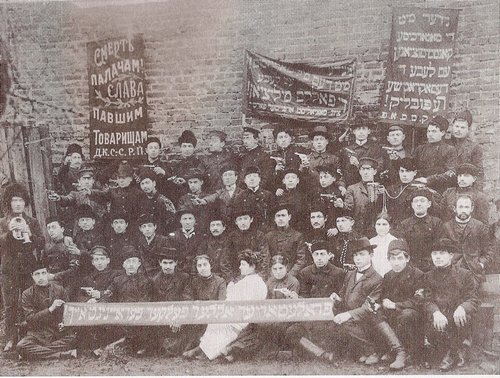 Zionist Revolutionaries with pistols, Daugavpils (now in Latvia),1905. The Yiddish and Russian Banners displayed include: (right) “Down with the Monarchistic Constitution! Long Live the Democratic Republic!” and (bottom) “Workers, All Peoples, Unite!”
In late 1904, 6000 Jewish activists issued a Declaration of Jewish Citizens calling for civil equality for Jews in Russia. In February 1905, religious communities in 32 cities sent a petition with a similar demand to the government in St. Petersburg. Then, toward the end of the March, 67 activists representing all shades of opinion except that of the Bundists attended an illegal meeting in Vilna, where they established the Union for the Attainment of Full Rights of Jewish People of Russia, a remarkably effective organization that promoted Jewish interests. It established branches in 14 provinces, mainly in the Pale of Settlement, and fought not only for equal rights for Jews but also for cultural autonomy — the right of Jews to maintain their own schools and their own language. The organization gained added stature in May 1905 by joining the Union of Unions, a large association of professionals committed to overturning the autocratic system of rule.
– Abraham Ascher, The YIVO Encyclopedia of Jews in Eastern Europe, 2008.

Yep. Their cup is overflowing alright.

A Shul Grows in Virginia