Sure, we disagreed about a number of things. You liked to tote guns around and champion the 2nd amendment. You opposed Affirmative Action and became a Republican later in life. You campaigned for George W. Bush, George Bush Sr., and Reagen. You boycotted Ice-T.
But at one point in your life, you supported the Civil Rights movement and became inextricably linked as an icon of Jewish Biblical history. For many of us, before our political awakening, we knew you as the man who carried the tablets down from the mountain. Or, a different subset of us knew you as the man who fell to his knees and cried out, “You Maniacs! You blew it up! Ah, damn you! God damn you all to hell!”
So God bless, Charlton Heston. May you be remembered for good (at least on TNT’s annual pre-Passover Ten Commandments screening). 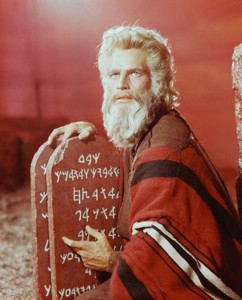 Everything Counts in Small Amounts

Yet more on heter, shmetter