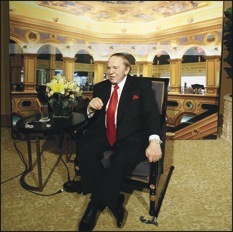 Profiled in all his ugliness in The New Yorker this week: Billionaire Sheldon Adelson is the third richest man in America, a huge funder of birthright israel, Bush’s election campaigns, the ZOA, the Republican Jewish Caucus (check out the new RJC Watch blog, by the way), One Jerusalem, AIPAC…the list goes on. You’re looking at the sugardaddy-Godfather of American (Jewish) right-wingery here.

As the New Yorker is prone to do, the article spans a whopping twelve pages, detailing the origins of his money in gambling, his use of campaign connections to Tom DeLay and others to scuttle a bill opposing China’s Olympic bid because it threatened a casino he was building in Macoa, and his vindictive funding of opposition to former political allies (or withdrawing a $250K pledge to a synagogue and giving it to Chabad instead, after the rabbi refused to cross a union picketline at one of Sheldon’s hotels). The man has also been sued by his own three sons for purportedly defrauding them.
The most preposterous assertion by Adelson (despite his outrageous attempts to take down Olmert’s coalition to get Bibi elected) has to be to this quote on his business ethics, which he gave before one of the many court cases he’s been tried in:

“I know there’s a perception in life that people who become financially successful do so by climbing up the broken backs of people whose backs they break, but . . . with the values that I grew up with, there’s just no way that I—that any deal can be broken. . . . I never climbed up on . . . anybody’s broken back,” Adelson said.

The article is extremely detailed into his business misdealings. Reading it is like watching a train wreck — you can’t tear your eyes away from the page, even as thick as it gets. The potential anti-Semitism quotient of the Adelson article should cross everyone’s mind at least once — “another rich Jew buying Congress” etc. Adelson is a particular embarrassment — not as a right-winger out to influence government, but as a Jew who is seen by the world to represent us. (Where is the ADL campaign against the stereotypes Sheldon is reinforcing?)
The greatest evils of the modern world are found in the banalities of policy, law and the structure of society. To read through the whole disinteresting nitty gritty of the article is almost painful. But you should.
I’m inspired greatly by Uri L’tzedek and J Street both for taking on Jewish-owned businesses and Jewish politicians pandering to Christian Zionist money, respectively, in public campaigns. Such incidents of Jewish ethical and moral courage are rare — such as the Everett family’s open opposition to a Tisch family tabacco kingpin’s appointment to the board of UJA-Fed of NY, another little incident from late 90s which gives me hope. Unfortunately, I feel the cases are few and far between.
As is said in Bavli, Shabbat 54b:

Kudos to Uri L’Tzedek and J Street, among all the others doing this work. You’re a pride to us all.

Shir-Yaakov breaks out some new tunes for Chanukah