Jewschool is very excited to co-sponsor Inside the Activists’ Studio, a collaboration of almost all the Jewish social justice groups out there. On Sunday, four local, everyday changemakers (a Bronx housing organizer, a young philanthropist, an org founder, and an attourney) join 300 of us, Jewish socially-concerned citizens for skillshares, music, food, and comeraderie! (Onine registration is closed, but the event is still open!)
Since the publication of the Nathan Cummings Foundation’s report on our growing social justice movement, there’s been much hmm’ing and ha’ing about how to better unite the explosion of changemaking outside the standard sectors. Generational changes and a growing impatience with the established institutions has fed money, time and the much-coveted unaffiliated Jew into their programs. This event we see as the beginning of a united Jewish social justice community.
And I say “united” because Avodahniks, Adamah fellows, AJWS trip participants, and all the others exist mostly (but not entirely) segregated from each other, siloed by their causes: urban justice, organic farming, global development. But if we’re really going to change the Jewish community — to wrestle the steering wheel away from the leaders who are parochially centered on solely Jewish concerns — we need to make connections across silos, cross-polinate leadership, and (at least semi-quarterly) party and celebrate together. Like, more than we do now.
Which is not to say the federation system’s social services budget is being ignored by yours truly. Millions of dollars are granted to those services which benefit Jews and non-Jews alike. But it’s not a structural solution. It’s only part of the solution. And it’s not enough of that part of the solution. It’s going to take a community-wide, herculean shift to turn the Jewish people from primarily self-defenders into one of the top servants of global equity. And we would like that very much.
Jewschool jumped onto this event because this coalition could be the beginning of something like that. 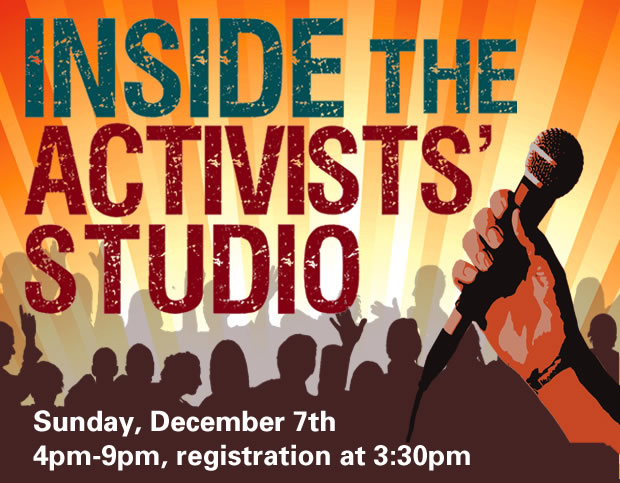 Inside the Activists’ Studio – NY

"Jews should not rely on Pharaohs."