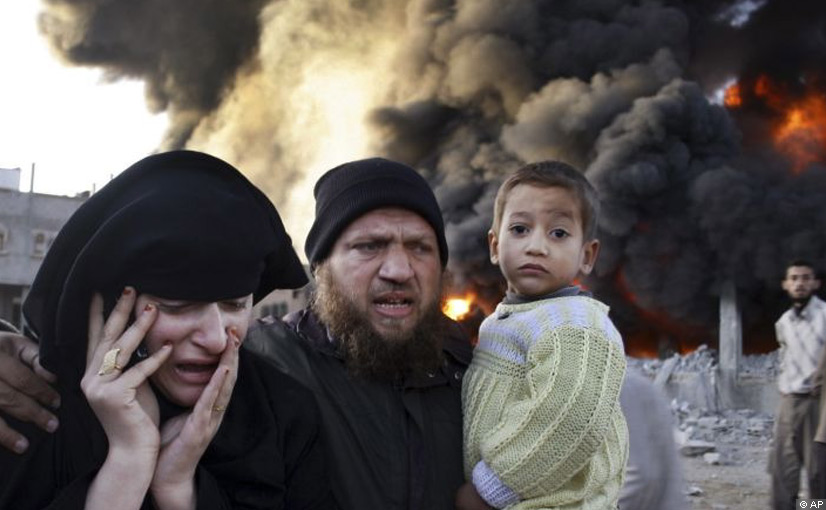 I knew my last post would generate passionate comments – and I confess that I did hesitate before posting something so patently emotional. I went ahead though, because as I read the increasingly tragic news about the Israel-Gaza conflict, I’m consciously resisting the knee-jerk impulse to paper over my emotions with dispassionate analysis. It’s becoming clear to me that our attempts to be “rational” keep us from facing the inherent irrationality of this conflict.
Of course the Qassam attacks against Southern Israel have been intolerable. Of course Hamas bears its share of responsibility for this conflict. But beyond the rhetorical “well, he started it” arguments (which could stretch well back to 1948 and beyond) there remains the central question: what will bring safety, security and ultimately peace to this tortured region? I realize there are no easy answers, but I believe to my marrow that it will not come by sending in the war planes and reducing what’s left of Gaza to rubble.

Does anyone in their right mind truly think this abject destruction will ultimately bring safety and security to Southern Israel?  In the end, Every Gazan killed equals that many more family members and friends who will now be forever enraged and inflamed against the Jewish state. If peace depends largely on cultivating moderates on the other side, what does blowing them to smithereens accomplish? Believe me, if Israel ultimately thinks their attacks will turn Gazans against Hamas, they will be sorely disappointed. If forced to choose between Israel and Hamas, who do we really think they will choose now?
But even more than the strategic considerations, I am infinitely more troubled by the deeper moral implications of Israel’s military actions. Yes, it is true that Hamas chose to end the ceasefire and yes, Israel has few good options. But it was ultimately Israel who made the decision to bombard Gaza with a massive air attack, loosing many several hundreds of bombs into densely populated city center, virtually guaranteeing widespread civilian carnage and death.
As I write these words, I can already predict the standard moral calculus: “Yes, but Hamas purposely launches Qassams into civilian areas while Israel tries to minimize civilian casualties whenever possible.”  I’m coming to realize that pat rhetorical equations like these might serve to help us sleep better at night, but they don’t change some basic unavoidable truths: that in the Israeli-Palestinian conflict, the military power dynamic is heavily weighted in Israel’s favor, that Hamas’ Qassams are but peashooters against Israel’s armed might and ultimately, as traumatic as it undoubtedly is to live in Sderot, Palestinian civilian casualties vastly outnumber Israel’s. And in the end, it matters little to the loved one of a dead civilian whether or not his/her death was caused intentionally or by “collateral damage.”
From what I can tell, Israel’s response to this latest bloody go-round amounts to: “We regret if civilians are killed, but they started it and anyhow that’s what happens in war.”  I certainly understand how Israel, a nation that has been in a constant state of war and conflict since its inception might develop such a moral trope. But whatever comfort it might afford us in the short term, it will not ultimately provide us with a path to peace – only a rationalization for prolonging the bloody status quo.
For me, among the countless commentaries I have read since Saturday, the voice most resembling sanity came (once again) from the great David Grossman, writing in a Ha’aretz editorial:

Are we too imprisoned in the familiar ceremony of war?…The line of self-control and the awareness of the obligation to protect the lives of the innocent in Gaza must be toed even now, precisely because Israel’s strength is almost limitless. Israel must constantly check to see when its force has crossed the line of legitimate and effective response, whose goal is deterrence and a restoration of the cease-fire, and from what point it is once again trapped in the usual spiral of violence.

NO JUSTICE, NO CHICKPEAS!

A Prayer For Joining the Knesset