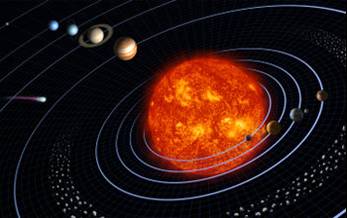 Let’s take a break from all the Gaza news and remind ourselves that the universe is much, much larger than these conflicts. 2009 has been declared the International Year of Astronomy (sponsored by the International Astronomical Union and UNESCO, along with organizational associates around the world), commemorating the 400th anniversary of the first astronomical observations with a telescope (by Galileo) and the publication of Kepler’s laws of planetary motion, two events that could be considered the birth of modern astronomy. The IYA is being celebrated with numerous events around the world, including a contest to come up with Hebrew names for the planets Uranus and Neptune!
You see, the first 5 non-Earth planets in our solar system are visible to the naked eye and were well-known to ancient astronomers. Therefore, they each have long-standing Hebrew names: Mercury is Kochav, Venus is Nogah, Mars is Ma’dim, Jupiter is Tzedek, and Saturn is Shabbetai. However, Uranus and Neptune were discovered in 1781 and 1846, and when Hebrew was revived as a spoken and scientific language, no Hebrew names were chosen; Hebrew speakers (like speakers of most languages) have referred to these planets by the name of a Greek and a Roman god. No more. The science division of the Academy of the Hebrew Language has announced a contest to select authentic Hebrew names. (Pluto has been demoted from planet status, and is therefore not included in the contest.)
Submissions will be accepted any time until Lag Ba’omer (May 12). Finalists will be chosen by a panel of Israeli astronomers and Academy members, and the final decision will be put to a public vote. The winners will be announced over Chanukah.
Be creative! I’ve already put in my submission (though I’m not going to tell you what it is until the finalists are announced). And good luck!