According to the Jerusalem Post, El Al is in talks with “representatives of the haredi community” about the establishment of mehadrin flights, with gender-segregated seating, strictly Glatt kosher food, and no secular in-flight movies. 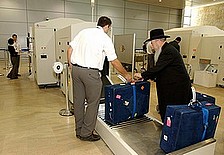 While no final decision has yet been made, Rabbi Yitzhak Goldknopf, of the Council for the Sanctity of the Shabbat and one of the main haredi negotiators, is optimistic, saying the meeting with El Al had been “very positive.”
Interestingly, in 2006 the same Jerusalem Post reporter covered a story about haredim in Israel establishing an entire mehadrin airline. Which makes the current news sound a little bit like the mehadrin recession special.

The RCA Cannot Speak for All Orthodoxy