A mishmosh of a few things that have come across my screen (and my life) in the last few weeks…
• In a December post about the remnants of historical cultural exchange in contemporary Judaism, I talked a bit about Brown professor Michael Satlow’s take on the development of Jewish civilizations. He’s now got a blog which features, among other things, a podcast called From Israelite to Jew (archived here and syndicated through iTunes). If you’ve always wanted to ponder the career of Ezra while you complete your spinning routine at Crunch, here’s your chance.
• February is Jewish Disability Awareness Month, and the Reform Movement’s Religious Action Center’s RACBlog has a great post by Rabbi Lynne Landsberg with some resources to help us think about how we can be more inclusive of difference in our communities.
• Speaking of inclusion, two weeks ago I attended an incredible event cosponsored by Keshet and the Interfaith Coalition for Transgender Equality called An Act of Faith. This article from Bay Windows (a Boston-area newspaper focused on the GLBT community) gives a sense of the event, but I have to say, it was really inspiring to see such a large number of people of faith (from quite a few different faith communities) come together to work towards equality for a group that is 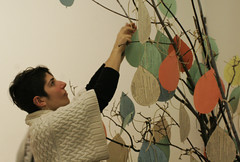 usually at worst disparaged or at best overlooked. There’s an important bill coming before the Massachusetts state legislature this year to ensure gender identity and expression can’t be used as a basis for discrimination for housing, employment, etc, as well as writing gender identity language into the existing hate-crimes laws. There are already (or, perhaps I should say, only) 13 states plus the District of Columbia that ensure these kinds of protections for transgender people. If your state isn’t one of them, think about getting in touch with ICTE or the Massachusetts Transgender Political Coalition to learn about how you can bring this campaign to your state.
• Finally, the Chicago-based duo Stereo Sinai caught my attention with their tagline “Biblegum Pop.”

I will admit to being a little disappointed to discover that their songs are more Lisa Loeb than Leslie Gore, but taken on their own terms the songs are really lovely. The pair (individually known as Miriam Brosseau and Alan Jay Sufrin) got their start with the lullaby “Gideon’s Song,” a setting of some verses from the book of Judges, which they wrote as a gift for their Rabbi’s new baby named Gideon. Realizing they were on to something, they have continued to record and perform together. Their songs are streaming for free on their website or available for download, but don’t look for a CD — the band has taken a position that it’s more environmentally friendly and economically conscious and artistically valid to release songs individually and exclusively in digital format. I will resist letting my cynical nature take over and wonder if that commitment would hold up in the event of the offer of a record deal and merely lament the creeping demise of the album format. I’ll spare you the rant about how placing songs in context can enrich their meaning and your enjoyment — my high school students already got that one this week.

Interview with Ferne Pearlstein, filmmaker of The Last Laugh