A survey, co-authored by Caryn Aviv (of Mosaic and the University of Denver) and Steven M. Cohen (of Jewschool fame) found that “[f]ew synagogues actively welcome gay and lesbian Jews.” 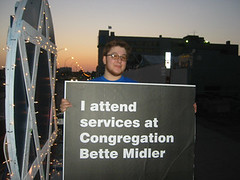 width=”180″ align=”right” />The new transdenominational synagogue survey on LGBT inclusion and diversity, which questioned 1,221 North American rabbis, synagogue directors and board presidents, found that 73 percent of respondents believe their congregations do a good or excellent job of welcoming gay and lesbian Jews. Nearly a quarter, mostly Orthodox, said they were minimally welcoming.
By contrast, only 33 percent of rabbis said their congregations held programs or events related to gay people. The most popular “program” was marriage equality, eclipsing events like gay pride Shabbat and gay and lesbian havurah groups.
“There’s a lot of goodwill in the American Jewish community, but there’s not a lot of action,” said Caryn Aviv, a Jewish studies scholar at the University of Denver and co-author of the study with Dr. Steven Cohen, a research professor of Jewish social policy at Hebrew Union College-Jewish Institute of Religion.

I attend services at independent minyanim (which I’m guessing were not polled in this survey). And, while they are certainly gay friendly, I wouldn’t say any of them are “actively welcoming.” The minyamin I was a part of in other cities weren’t either, nor were the synagogues before that (some were, in fact, actively unwelcoming).
If you have a position of leadership in your Jewish community, be it a minyan, shul, or social group, I would urge you plan a program that explicitly deals with LGBT issues – make it an educational or advocacy event, or just a social event for the LGBT in your community. See if it makes a difference for those who attend.
And, because it’s annoying:

While 73 percent of non-Orthodox congregations had rabbis who officiated at same-sex weddings or commitment ceremonies, the same was not true for interfaith marriages. According to the survey, 40 percent of rabbis of Reform, Renewal, Reconstructionist and unaffiliated congregations do not officiate at interfaith weddings.

Why are same-sex marriages always compared to interfaith marriages? One has nothing to do with the other. Two separate halakhic issues. (Two separate secular/civil/legal isssues – one is legal, one is illegal (in most US states).) Is interfaith marriage suppose to be a litmus test of how “progressive” a rabbi is, and thus a good metre by which to measure if they’d also officiate over same-sex marriages? Bah.
[Article here.]

Sex in front of the menorah: Permissible?