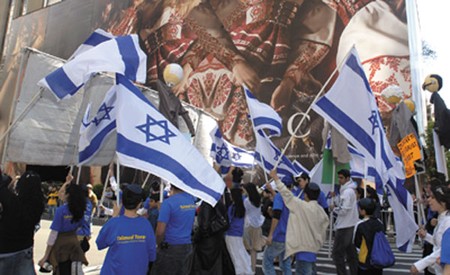 Read Rabbi Sid Schwartz’s enormously important piece in the Jewish Week in which he describes and comments on this chilling experience at a Salute to Israel Day concert in Central Park:

Then a band launched into a rousing rendition of Am Yisrael Chai…A group of young men in their 20’s with kippot and tziztzit were right in front of me dancing in a frenzy. But they alternated the verse that meant “the people of Israel lives” with “all the Arabs must die.” It rhymed with the Hebrew. Given the way all joined in, it was clear that this was not the first time it was sung.
I leaned over to a young man who was next to me, also wearing a kippah and tzitzit. I nodded at the dancers and asked: “Does this song bother you?” He looked at me with a suspicious look and replied: “This is Zionism.”

Rabbi Sid’s well-chosen final word on the matter: “Islam is not the only religion that is in danger of being hijacked.”

"This is not the IDF we knew"

Muslims are The New Jews