Next Wednesday, July 8, I’m doing a free reading at the 92Y Tribeca with
one of my heroes. 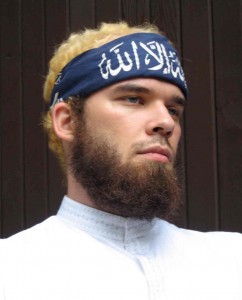 Michael Muhammad Knight wrote the Muslim punk-rock novel “The Taqwacores,” which might just be my favorite spiritual book ever. Sure, we get alterna-Jewish stuff tossed at us from every direction, but MMK started from ground zero, taking the seemingly disparate elements of punk culture and Muslim spirituality and fusing them together in a book about what matters most. (In the book, he wrote about an imaginary socio-political-art movement called Taqwacore — which, amazingly, solidified into a real movement after people read the book and were inspired to form bands. If you haven’t heard me rave about him, you don’t have to look very far.
My own first novel, Never Mind the Goldbergs, was my kind of punk-rock Jewish fantasy. In it, a 17-year-old punk Orthodox Jewish girl is trying to prove

to the world that it isn’t a contradiction in terms to like loud, passionate music at the same time that you like loud, passionate praying. (And then she stars on a TV sitcom, where she’s basically not allowed to be loud or passionate about anything.)
I might read some of Goldbergs and/or my memoir about becoming observant, Yom Kippur a Go-Go, as well as something new and exciting and unprepared. And then we might talk about the cultural value of revolution…
Or we might just dance.