Earlier today, I saw a tweet from dlevy and, to be honest, when I saw it was about Hatikvah, I didn’t pay much attention. But then I listened to the track, in all its horrifying glory. 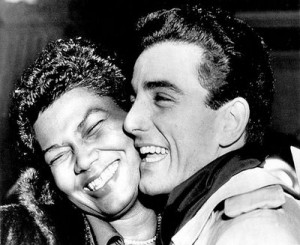 The recording we listened to was from a “collectibles” album; Pearl Bailey and Louis Bellson duets. They didn’t record this album together back in the days of vinyl;  this CD was released in 2007, though it clearly wasn’t remixed or remastered. The original recording quality made it difficult to hear all the words, and I’m sure some of these words aren’t accurate. (You’ll also note the use of my favourite noun-substitute, “shmeh shmeh,” [h/t SBB] when we couldn’t make out two syllables). But since we couldn’t find the lyrics (the internets have let us down), we tried to transcribe them. And since we couldn’t find the track online for your listening pleasure,  you can use the words below, and sing ’em to the tune of Hatikvah.

Compare these lyrics to the official words. There’s no mention of Jews or Zion. I think the lyrics are the result of a very specific time and voice: it’s secular, post-Holocaust (probably recorded in the early 1950s, from what little research I could find), agriculture and nature focused. And speaks to the possibilities that the new country held in the year years. Oh, what a ways we’ve come… This song conjures up images of kibbutzniks in timbels holding hands and singing. Either Pearly and Louis were incredibly naïve, or the PR machine really did its job well in the early years of Israel’s nationhood.
Pearl and Louis deserve a posthumous award for the line “bless it, caress it.” You can bet I will start using it in my daily conversations (melukhlakh [dirty]).

Such a Nice Jewish Boy