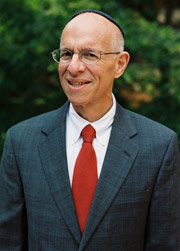 Among those sharing nostalgia for Woodstock this weekend, a JTS Bible professor, Alan Cooper.

A lot of people say they were at Woodstock, but only Alan Cooper can say that he was the lead singer who took the stage right before Jimi Hendrix.
He sang bass for Sha Na Na, the goofy but endearing ’50s nostalgia act that was the next-to-last performer at the festival.
“It was Monday morning when we finally came on, around daybreak,” he said. “The reason there was still a crowd was that the concluding act was Jimi Hendrix.”
Cooper, 59, is now provost of the Jewish Theological Seminary in Manhattan, a Bible scholar whose bio on the seminary Web site does not mention that he was a founding member of Sha Na Na.
…
Sha Na Na did a full, 40-minute set at Woodstock after days without any real sleep. There was no water, Cooper remembers, but plenty of champagne. The guys in Ten Years After had a camper and lots of food,
which they were happy to share with Cooper and his gang.
Cooper, a Long Island native now living in South Orange, N.J., left the band when he graduated in 1971 and headed for grad school. He was replaced by Jon “Bowser” Bauman, who became the face of Sha Na Na for
decades.
[Editor’s note: obviously we all know about Bowser’s Jewish roots from Adam Sandler]
“Some of the schtik he did was stuff he inherited from me,” Cooper said. Woodstock devotees still remember Cooper. A couple of years ago, a few came to the seminary and had Cooper sign about 50 Woodstock artifacts.
…
Can he believe it’s been 40 years?
“It’s extraordinary,” the Bible scholar said. “It doesn’t feel like a day over 39.”
Full story.

On the Anatomy of a Memoir(ist): An Interview with Leah Vincent

Blogging the Omer Day 10: But how do you schecht it?

"From Where Did the Israelites Get Timbrels in the Desert?"